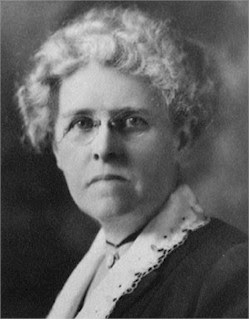 One hundred years and two weeks ago, on April 1, 1908, Lola Baldwin was hired as the first female police officer in the United States, in Portland, Oregon.

Aurora (“Lola”) Greene Baldwin (1860-1957) began her career as a teacher. After her marriage, she volunteered as a social worker with young women in several eastern cities. Her Traveler’s Aid Association protected young female visitors to the 1905 Lewis and Clark Exposition in Portland. When the exposition closed, she continued providing services through the YWCA, and later, through authorization from the City Council (which stipulated that she and her assistants pass the police civil service exam).

As the country’s first sworn policewoman, Baldwin joined women in the fields of social work, public health and juvenile justice to exemplify the Progressive Era notion of the “City Mother.” Baldwin went on to organize the Portland Juvenile Court in 1905, and was named its first probation officer for girls.

Baldwin was a suffragist, and advocated pay equity with men to keep young women from prostitution or crime. Baldwin was a charter member of the Oregon Social Hygiene Society which disseminated sex education and venereal disease prevention information.

After retiring from the Police Department in 1922, she served on the Oregon Parole Board and the National Board of Prisons and Prison Labor. Baldwin remained a lobbyist for policewomen’s issues, both locally and nationally, until her death.

After a century, the number of women serving as police officers is still low. Nationwide, women make up 14 percent of all officers. Only one percent of all police chiefs are female. (info from the New York Times and Portlandonline.com)
Posted by Michael N. Marcus at 4:27 AM