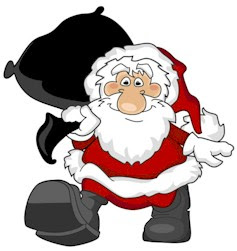 During the middle and late 1800s, Christmas became so popular that it began to be declared a state holiday. Alabama was the first state to do so, in 1836. By the time of the Civil War another 28 states had made it a holiday. All US states and territories recognized Christmas as a holiday by 1890, with Oklahoma the last. Federal employees were given Christmas as a paid holiday starting in 1885. (info from funtrivia.com)
Posted by Michael N. Marcus at 3:03 AM