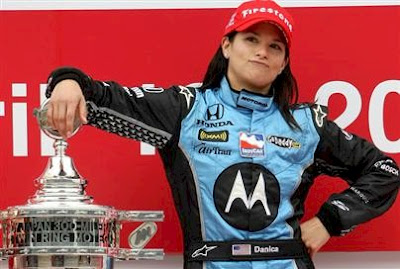 “I’m glad it finally happened,” the 26-year-old driver said. “But I would be lying if I told you I didn’t think it would be me.”

Her car's owner was ecstatic, insisting more victories await. Her family could not congratulate her enough. All of which made Patrick a bit teary.

“When it actually happened, maybe it was a little anticlimactic,” she said. “Then the emotions came out and that was a little girly of me.”

Win No. 1 was a long time coming. Patrick finished a career-best seventh in the standings last year when her best finish was second in the race at Detroit’s Belle Isle. Her first IndyCar race was in 2005. (info from The Associated Press)
Posted by Michael N. Marcus at 3:21 AM