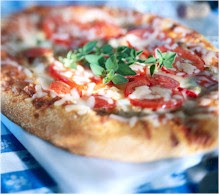 Long before Italians ate pizza, Babylonians, Israelites, Egyptians and other ancient Middle Eastern people baked flat bread in mud ovens. It was like pita, which is still common in Greece, and in Greek restaurants in the US. Greeks, Romans and their neighbors added the original toppings: olive oil and spices -- but probably no tofu, pineapple or barbecue chicken.

The modern pizza is believed to have been developed by poor people in Naples, Italy. In 1889, Rafaele Esposito of the Pizzeria di Pietro e Basta Cosi (now called Pizzeria Brandi), is said to have created a dish for Italy's King Umberto and Queen Margherita. In order to impress them and show his patriotism, Esposito topped the dough with food that would represent the colors of Italy: red tomato, white mozzarella cheese, and green basil. The king and queen were impressed, and the dish became very popular.

By the beginning of the 1900's, Italian immigrants brought pizza to the United States, particularly to New Haven, New York and Chicago. Because those cities had large Italian populations, restaurants began serving pizza. American soldiers who tried pizza while fighting in Italy in World War II, encouraged restaurants to offer it when they got home.

The first pizzeria in the United States was probably Lombardi's in New York. The second may have been Frank Pepe's in New Haven. (info from Pizza-pedia and other sources)
Posted by Michael N. Marcus at 6:03 AM