1982: first US execution by lethal injection 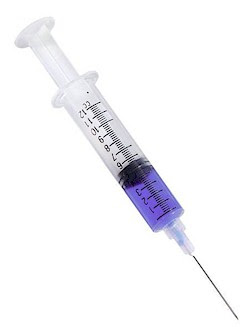 On Wednesday, The US Supreme Court voted 7-2 to reject inmates' challenges to the procedure in Kentucky that use three drugs to sedate, paralyze and kill inmates who have been sentenced to death.

State statutes typically provide: "The punishment of death must be inflicted by continuous, intravenous administration of a lethal quantity of an ultrashort-acting barbiturate in combination with a chemical paralytic agent until death is pronounced by a licensed physician according to accepted standards of medical practice."

The execution protocol for most jurisdictions authorizes the use of a combination of three drugs. The first, sodium thiopental or sodium pentothal, is a barbiturate that renders the prisoner unconscious. The second, pancuronium bromide, is a muscle relaxant that paralyzes the diaphragm and lungs. The third, potassium chloride, causes cardiac arrest. Each chemical is lethal.

The inmate is escorted into the execution chamber and is strapped onto a gurney with ankle and wrist restraints. The inmate is connected to a cardiac monitor which is connected to a printer outside the execution chamber. An IV is started in two usable veins, one in each arm, and a flow of normal saline solution is administered at a slow rate. One line is held in reserve in case of a blockage or malfunction in the other. At the warden’s signal, 5.0 grams of sodium pentothal (in 20 cc of diluent) is administered, then the line is flushed with sterile normal saline solution. This is followed by 50 cc of pancuronium bromide, a saline flush, and finally, 50 cc of potassium chloride.

The most common problem encountered is collapsing veins and the inability to properly insert the IV. Some states allow for a Thorazine or sedative injection to facilitate IV insertion. (info from Clarkprosecutor.org)
Posted by Michael N. Marcus at 6:01 AM

Are you some kind of an anti-death-penalty wuss? Why should honest tax payers pay good money to keep killers alive for decades? Let's put them in the ground QUICKLY.