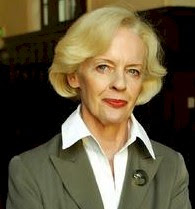 Yesterday a woman was appointed for the first time as governor general -- the official representative of the British monarch and Australia's highest office. Quentin Bryce is a prominent lawyer, academic and women's activist. She will take office in September.

Today she said she was honored to take on the role but would not comment on whether she would be the country's last governor-general. With the recent election of the Rudd Government, there is new speculation of Australia becoming an independent republic and leaving the British Commonwealth of Nations.

"It's an issue for the Australian people and there will be a very robust and stimulating debate about that," she told reporters.

Law Society of New South Wales president Hugh Macken said her contribution to the legal community and her own successes had elevated the calibre of the profession. "The appointment of Quentin Bryce as governor-general is not only a testament to her extraordinary skill and expertise, but her appointment also recognises the extraordinary work she has done in helping to pave the way for women within the legal profession. She has been a pioneer in all aspects of her life and the news of her position is not only another milestone in her exemplary career to date, but a historic moment for the nation, the legal community and women lawyers within Australia." (info and photo from the Sidney Morning Herald)
Posted by Michael N. Marcus at 3:10 AM