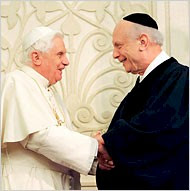 The pope expressed his esteem for “the Jewish community in New York City,” and for his host, Senior Rabbi Arthur Schneier of the Park East Synagogue, a Holocaust survivor who extended the invitation to him, and extolled the virtues of “building bridges of friendship” between people of all faiths.

Pope Benedict mentioned the coming Passover holiday: “as you prepare to celebrate the great deeds of the Almighty,” and described the emotional power for him “to recall that Jesus, as a young boy, heard the words of Scripture and prayed in a place such as this.”

Jewish men and women sat in the pews to the left, the men wearing white yarmulkes. In the pews to the right were a group of Roman Catholic cardinals and bishops wearing red skullcaps. From the balcony above, their caps suggested the beginning of a game of checkers.

In an exchange of gifts, the pope gave Rabbi Schneier a replica of a medieval Hebrew parchment, part of the Vatican library collection, containing the legal writings of a renowned rabbinical scholar, Jacob Ben Asher. Members of the synagogue gave the pope a silver Seder plate and a large package of matzo, which the pontiff said he would eat on Saturday, drawing hearty laughs. (info from The New York Times, photo from The Associated Press)
Posted by Michael N. Marcus at 6:39 AM