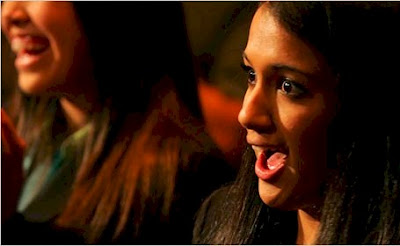 Girls won top honors for the first time in the Siemens Competition in Math, Science and Technology, one of the nation’s most coveted student science awards, which were announced Monday at New York University.

Janelle Schlossberger and Amanda Marinoff, both 17 and seniors at Plainview-Old Bethpage John F. Kennedy High School on Long Island, split the first prize — a $100,000 scholarship — in the team category for creating a molecule that helps block the reproduction of drug-resistant tuberculosis bacteria.

Isha Himani Jain, 16, (in photo) a senior at Freedom High School in Bethlehem, PA, placed first in the individual category for her studies of bone growth in zebra fish, whose tail fins grow in spurts, similar to the way children’s bones do. She will get a $100,000 scholarship.

Alicia Darnell, 17, a senior at Pelham Memorial High School in Pelham, NY, won second place and a $50,000 scholarship in the individual category for research that identified genetic defects that could play a role in the development of Lou Gehrig’s disease.

The Siemens competition was first held in 1998. James Whaley, president of the Siemens Foundation, which oversees the competition for Siemens AG, a global electronics and engineering company, said the competition results send a great message to young women.

This year, more than 1,600 students nationwide entered the Siemens competition. After several rounds of judging, 20 finalists were chosen to present their projects at NYU and to vie for scholarships ranging from $10,000 to $100,000. Eleven of the finalists were girls. It was the first year that girls outnumbered boys in the final round. Most finalists attend public school.

On Sunday, the students gave 12-minute presentations of their projects, filled with explanations about Herceptin resistance (when breast cancer patients with HER2-positive tumors do not respond to the drug Herceptin) and FtsZ inhibitors (experiments on a specific protein that could lead to a new treatment for tuberculosis).

One of the most popular was by three home-schooled girls from Pennsylvania and New Jersey: Caroline Lang, 16; Rebecca Ehrhardt, 15; and Naomi Collipp, 16. They developed a “Burgercam” monitoring system, designed to determine when E. coli bacteria in hamburgers have been safely eliminated by measuring the shrinkage of each patty when fully cooked.

Several hundred hamburgers later, the girls took home fifth place and $20,000 in scholarship money. The "Hamburger Girls” have been friends since they were toddlers and had stayed in touch through a group for home-schooled children. “They were concerned it wasn’t sophisticated enough, but they wanted to try,” said Rebecca’s mother, Alicia Butcher Ehrhardt, a physicist.

Three-quarters of the finalists have a parent who is a scientist. The parents of Alicia Darnell, who won second place, are medical researchers at Rockefeller University, and her maternal grandparents were scientists, too. Isha Himani Jain, who took home the top individual prize, published her first research paper with her father, a professor at Lehigh University, when she was 10 or 11; her mother is a doctor.

The Siemens Foundation arranged some sightseeing for the finalists — an outing to “The Lion King,” bowling at Chelsea Piers and a group picture on the JumboTron in Times Square.

“It was the most fun I’ve ever had,” said Alexander C. Huang, 17, a senior at Plano Senior High School in Plano, Tex., who earned a $10,000 scholarship for research on combating jet lag. He said he enjoyed the opportunity to be surrounded by like-minded students. “They’re even a little bit nerdier than me.” (info & photo from The New York Times)
Posted by Michael N. Marcus at 4:22 AM