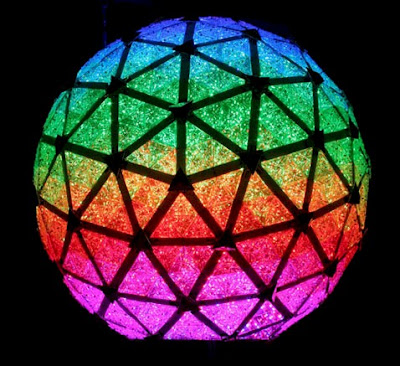 Revelers began celebrating New Year's Eve in New York City's Times Square as early as 1904, but it was in 1907 that the New Year's Eve ball made its maiden descent from the flagpole atop One Times Square. This original ball, constructed of iron and wood and adorned with 100 25-watt light bulbs, was 5 feet in diameter and weighed 700 pounds.

In 1920, a 400-pound ball made entirely of iron replaced the original.

The ball has been lowered every year since 1907, with the exceptions of 1942 and 1943, when its use was suspended due to the wartime "dimout" of lights in New York City. The crowds who still gathered in Times Square in those years greeted the New Year with a moment of silence followed by chimes.

In 1955, the iron ball was replaced with an aluminum ball weighing a mere 150 pounds. This aluminum Ball remained unchanged until the 1980s, when red light bulbs and the addition of a green stem converted the Ball into an apple for the "I Love New York" marketing campaign from 1981 until 1988.

After seven years, the traditional ball with white light bulbs and without the green stem returned to brightly light the sky above Times Square. In 1995, the ball was upgraded with aluminum skin, rhinestones, strobes, and computer controls, but the aluminum ball was lowered for the last time in 1998.

For Times Square 2000, the millennium celebration, the New Year's Eve ball was completely redesigned by Waterford Crystal. The new crystal ball combined the latest technology with traditional materials, at the end and beginning of a
millennium.

The 2000 ball was a geodesic sphere, six feet in diameter, and weighed approximately 1,070 pounds. It was covered with a total of 504 Waterford crystal triangles that varied in size.

These crystal triangles were bolted to 168 translucent triangular lexan panels which were attached to the aluminum frame of the Ball. The Times Square New Year's Eve ball is celebrating its centennial by going green, with 9,576 energy-efficient bulbs that use about the same amount of electricity as 10 toasters.

Philips Lighting, which created the LED bulbs specifically for the event, says they are smaller but more than twice as bright as last year's lights, which were a mix of more than 600 incandescent and halogen bulbs. And the new lights can create more than 16 million colors for a kaleidoscope of hues against the 672 Waterford Crystal triangles.

All 696 lights and 90 rotating pyramid mirrors are computer controlled, enabling the ball to produce a state-of-the-art light show of eye-dazzling color patterns and a spectacular kaleidoscope effect atop One Times Square.

The actual notion of a ball "dropping" to signal the passage of time dates back long before New Year's Eve was ever celebrated in Times Square. The first known "time ball" was installed atop England's Royal Observatory at Greenwich in 1833. This ball would drop at one o'clock every afternoon, allowing the captains of nearby ships to precisely set their chronometers.

Around 150 public time balls are believed to have been installed around the world after the success at Greenwich, though few survive and still work. The tradition is carried on today in places like the United States Naval Observatory in Washington, DC, where a time ball descends from a flagpole at noon each day; and of course, once a year in Times Square, where it marks the stroke of midnight, not for ships' captains, but for over one billion people watching worldwide. (info from the Times Square Alliance & The Associated Press)
Posted by Michael N. Marcus at 3:14 AM