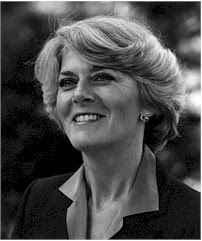 Geraldine Anne Ferraro (born 1935) is a Democratic politician and former member of the US House of Representatives. She is best known as the first and only woman to date to represent a major US political party as a candidate for Vice President. Ferraro and running mate Walter Mondale were defeated in a landslide by incumbent President Ronald Reagan and Vice President George H. W. Bush in the 1984 election. She was later appointed as an ambassador to the United Nations and is currently a businesswoman.

Ferraro was elected to the House of Representatives from New York's Ninth Congressional District in Queens in 1978 and served three two-year terms, compiling a generally liberal voting record on social and economic issues. While in Congress she served on the Public Works Committee, the Budget Committee, and the Post Office Committee. She also served a term as the Secretary of the House Democratic Caucus, the first woman in that position. She was the Chairwoman of the Platform Committee for the 1984 Democratic National Convention.

Ferraro was seen as someone with a bright political future; she was even speculated to run for president or vice president, however she did not win the general election. Any speculation about a potential rise to the Speakership was stomped out when she did not return to the House after her White House run. Ferraro was a potential Senate candidate, and ran twice, losing extremely close primary races. However, she won an ambassadorship to the United Nations during the presidential administration of Bill Clinton.

At the time, the choice of Ferraro was viewed as a gamble, and pundits were uncertain if the choice would gain or lose more votes for the Mondale campaign. In her acceptance speech upon being chosen Mondale's running mate, Ferraro said, "The daughter of an immigrant from Italy has been chosen to run for vice president in the new land my father came to love."

Prior to choosing a running mate, Mondale was 16 points behind Reagan. After choosing Ferraro, the score went even. Her popularity helped Mondale, but eventually he dipped in the polls once more. Ferraro was quite popular and could easily match Bush in polls, however Mondale was less liked. Mondale was previously the Vice President under Jimmy Carter.

As a Catholic, Ferraro came under fire from the Catholic Church for being pro-choice, a position in conflict with doctrine. She strongly defended her position at the debate, which earned her rapturous applause and even admiration from her opponent.

Mondale's campaign was already far behind the Republican ticket when Ferraro joined the ticket, and one issue that hurt her credibility was her disclosure of her husband's tax returns.

In July 1984, she said she would release both her and her husband's tax returns. Yet a month later she backtracked and said she would release only her returns. Then she backtracked again, saying her husband would release "a financial — a tax statement" on August 20. But she must not have consulted her husband, because he initially refused. To her astonishment, news surfaced that when she was a baby both parents had been under federal criminal indictment for gambling; the charges were dropped when her father died. After the election the House Ethics Committee officially criticized her mishandling of campaign finances.

There was only one Vice Presidential debate between Congresswoman Ferraro and Vice President Bush, which was proclaimed mostly neutral by the press. Ferraro's experience was questioned at the debate and she was asked how her three terms in congress stacked up with Bush's experience (two House terms, career as an ambassador to China and the United Nations, CIA Director, and four years as Vice President).

“Well, let me first say that I wasn't born at the age of forty-three when I entered Congress. I did have a life before that as well. I was a prosecutor for almost five years in the district attorney's office in Queens County and I was a teacher."

Barbara Bush, when asked what she thought of Ferraro, said she could respond, however, the word she was thinking of rhymes with "rich." Later that evening Mrs. Bush called Ferraro to apologize for allegedly calling her a "witch". Ferraro mentioned this in an article she wrote about Hillary Clinton's presidential campaign in a December 25, 2006 – January 1, 2007 issue of Newsweek.

Post-election polls found that the majority of female voters voted against her, turning instead to re-elect Reagan and Bush. However, most women had also voted against her because of her running mate. It is speculated that a stronger presidential candidate may have made Ferraro vice-president, for she was quite well-liked among many women, even Republicans.

She published an autobiography, Ferraro: My Story, in 1985, and in 1992 ran unsuccessfully for Democratic nomination for a New York seat in the US Senate. She finished second in the heated primary behind State Attorney General Robert Abrams. She placed ahead of Rev. Al Sharpton and New York City Comptroller and former congresswoman Elizabeth Holtzman in the primary. She has said that if she had not run for Vice President, she would have sought the Senate seat in 1986.

In 1998, Ferraro ran for the Senate again. She started off as the frontrunner for the nomination but lost ground in the late summer months. She finished second behind Congressman Charles Schumer and placed ahead of New York City Public Advocate Mark J. Green. Schumer went on to defeat D'Amato in the general election.

Ferraro served as president of G&L Strategies, a management consulting firm, and is now a senior managing director of the Global Consulting Group, a corporate public relations firm. In 1998, she was diagnosed with multiple myeloma, the second-most common form of blood cancer after leukemia. She has become an avid supporter of the Multiple Myeloma Research Foundation. She is an honorary board member of the National Organization of Italian American Women. She joined Blank Rome Government Relations LLC as a principal on February 1, 2007.

In Newsweek she announced her support for presidential candidate Hillary Rodham Clinton. In the article, entitled "What We Learned the Hard Way," she thanked Walter Mondale for taking down the "Men Only" sign from the White House. She compared his selecting her as a running mate to Roman Catholic Al Smith's running for president in 1928 and opening the door for Catholic John F. Kennedy in 1960. (info from Wikipedia)
Posted by Michael N. Marcus at 3:29 AM