1928: first woman flies across the Atlantic 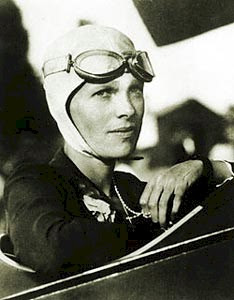 Amelia Earhart was the first woman to cross the Atlantic Ocean by airplane. She was part of a three-person crew which flew from Nova Scotia to Wales on June 18, 1928.

Earhart was mostly a passenger. Her co-pilots Wilmer Stultz and Louis Gordon operated the plane, but were largely ignored in the hubbub over Earhart's accomplishment. Her book about the flight, 20 Hours, 40 Minutes, was a bestseller.

Four years later, on May 20, 1932, Earhart flew alone from Newfoundland to Ireland, becoming the first woman to fly solo across the Atlantic. (Charles Lindbergh was the first man to do it, having soloed in 1927.) In 1937 Earhart disappeared while attempting yet another first: to become the first pilot to fly around the world at the equator.

Four years after Earhart's solo flight, Beryl Markham became the first person to fly the Atlantic from east to west, against the prevailing winds. Markham was an accomplished bush pilot who had grown up and learned to fly in Kenya. She departed from London on September 4, 1936, headed for New York, and crash-landed the next day in a peat bog in Nova Scotia. (info from Who2.com, photo from AmeliaEarhart.com)
Posted by Michael N. Marcus at 3:35 AM