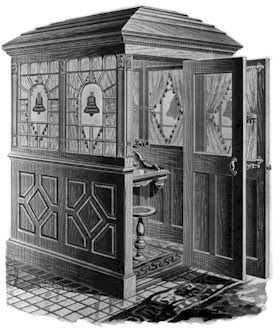 The first public pay telephone was set up in 1878, just two years after Alexander Graham Bell invented the phone. The first coin-operated pay phone was installed in 1889 in Hartford.

For decades after the payphone's invention, many Americans relied on them because of the expense and difficulty in obtaining reliable home service. Only after World War II did the telephone become a household necessity.

Payphones found a place in popular culture. Clark Kent, alter ego of comic-book hero Superman, often changed into his Superman uniform in phone booths. Older movies often showed reporters rushing into phone booths to report breaking stories. In the late 1950s, college students competed to see how many could fit into a booth. (The record is 25, according to the Guinness Book of World Records.)

Since 1998, however, the number of payphones in service has shrunk to about one million from 2.6 million. The main reason has been the proliferation of cellphones. By late 2007, there were almost 251 million cellphone customers nationwide among a US population of 301 million.

For many years, AT&T's Western Electric division was the nation's major manufacturer of payphones. In 1996, AT&T spun off its phone equipment manufacturing and sales operation as "Lucent Technologies" (recently merged into Alcatel of France). In 1997, Lucent sold its payphone business to a competitor, Elcotel. (some info from The Wall Street Journal)
Posted by Michael N. Marcus at 3:35 AM