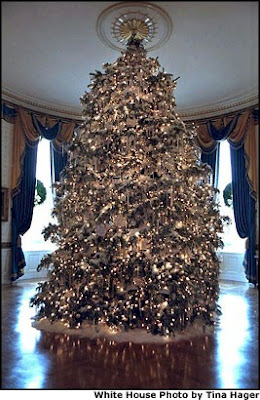 The tradition of a placing a decorated tree in the White House began in 1889 on Christmas morning during the Presidency of Benjamin Harrison.

The President's grandchildren, Benjamin and Mary McKee, led the Harrison household into the second floor Oval Room to view the tree, which was lit with candles. Stockings hung from the mantel, and presents were distributed to family and staff. President Harrison gave turkeys and gloves to his employees, and he received a silver-dollar-shaped picture holder from his daughter, Mame Harrison McKee.

What began as a family gathering has become a national tradition. Over the years, the White House tree has reflected both the times and the tastes of the First Family. In 1895 First Lady Frances Cleveland was the first to use electric lights on the White House tree. First Lady Jacqueline Kennedy began the tradition of Christmas Tree themes when she decorated the 1961 Christmas tree in toy trimmings from the Nutcracker Suite ballet by Tchaikovsky.
Posted by Michael N. Marcus at 5:12 AM