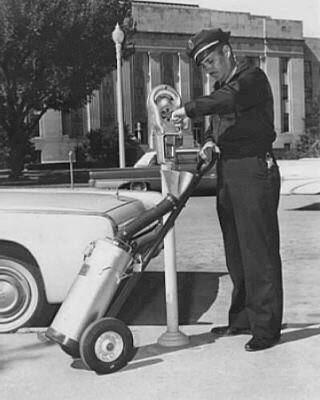 The first parking meter installed was in Oklahoma City, on July 16, 1935. Magee had been appointed to the Oklahoma City Chamber of Commerce traffic committee, and was assigned the task of solving a downtown parking problem. People who worked in the area were parking all day on downtown streets, leaving few spaces for shoppers and visitors.

Magee's solution was to install parking meters, charge for the use of the parking spaces, and turn over those spaces that would otherwise have been filled by all day parkers. In addition, the parking meters would generate revenue for the city.

The idea of metered parking caught on worldwide in other municipalities, plus colleges, transportation terminals and private parking facilities. In the United States alone, there are an estimated five million parking meters in use, collecting many millions of dollars.

The early parking meters were totally mechanical (as are many even today). The meters were powered by a clock-type mainspring, which required periodic winding. There were two general approaches to accomplishing this: automatic and manual.

With an automatic meter, the patron merely inserts the required coin and the mechanism moves the "time remaining" indicator to the appropriate location, and starts the timing mechanism. While this is convenient for the patron, it requires parking meter maintenance personnel to periodically walk the streets winding parking meters.

In a manual meter, winding is accomplished by the patron turning a handle after a coin is inserted. Since the meter only needs to run long enough for the current patron's time to expire (a few hours, at most), the mainspring can be made smaller and runs down much faster. In addition, the employees' hours required to wind parking meters can be eliminated which, in turn, reduces overhead costs and increases the net revenues to the meter owner.

As parking meters became more and more common, criminals discovered that each one could contain a pile of money, It was relatively easy to break into a parking meter and parking meter burglaries were common. This lead to security improvements, and by the mid 1960's most meters were available with armored coin boxes.

Although many cities were able to reduce their personnel costs by using manual parking meters, the money still had to be collected from the meters on a regular basis, and this required manpower. So did installing posts upon which to mount the meters. Occasionally those posts got hit by a car, and had to be straightened or replaced. And for every metered parking space, there were one post and one meter.

Manufacturers came up with a way to reduce their customers' costs, and thus further improve their revenues: the dual head parking meter.

While there have been a number of improvements in mechanical parking meters over the years, and there are probably hundreds of thousands such meters still in use, the introduction of electronic parking meters was a quantum leap in technology.

Some of the latest offerings in electronic meters provide for on-board data storage and transfer to central databases for later analysis. Data includes information such as the amount of money a meter has collected, coin counts, meter usage patterns, violation information, etc.

A few models have proximity sensors which clear the time on a meter when a vehicle vacates its parking space, thus preventing drivers from parking on someone else's remaining time. At least one manufacturer offers a meter that takes a photograph of vehicles that are still parked after time has expired.

While most new features serve only the interests of the meters' owners, a few meters are actually "driver friendly." Some accept prepaid parking cards, and if a driver returns before his time has expired, the card can be reinserted in the meter for a refund of the value of remaining time.

Some parking meters are not parking meters in the traditional sense. They are automated payment centers that dispense a receipt which the patron displays on the dashboard. Such "pay and display" systems serve a number of parking spaces with a single unit, reducing sidewalk clutter and personnel costs associated with meter maintenance and cash collection.