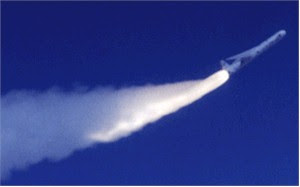 Space Services is a Houston-based aerospace company responsible for the first private launch into outer space, and the first post cremation memorial spaceflight.

Space Services conducted its first "space funeral flight" in 1997 with the remains of Star Trek creator Gene Roddenberry. Roddenberry's ashes traveled with those of 23 others, including a 4-year-old Japanese boy, a restaurateur and several former NASA scientists.

The Space Services team placed the ash-filled capsules in a tube, which went inside a rocket scheduled to send a satellite into space. Once in orbit, the satellite separated from the rocket's last stage, which continued to circle the earth with the capsules inside. The capsules should stay in orbit between ten and several hundred years before falling and "vaporizing like a shooting star," according to the company.

Last week, Space Services used its own rocket to launch a cargo of ashes, including those of James Doohan, who played the starship Enterprise's chief engineer Scotty on Star Trek.

Remains of the actor (born in Canada, not Scotland), who died two years ago at the age of 85, hurtled to the edge of space aboard a telephone pole-size rocket that blasted off from a launch pad in New Mexico.

Doohan inspired the legendary catch phrase "Beam me up, Scotty" -- even though it was never actually uttered on the TV show.

Hundreds of spectators clapped, cheered and cried as his ashes roared aloft along with the remains of some 200 other people, including astronaut Gordon Cooper, who first went into space in 1963. Cooper died in 2004 at age 77.

Space Services charges $495 to send a portion of a person's ashes into suborbital space. The firm had originally planned to blast Doohan's remains into space two years ago. The flight was delayed by tests, then by a misfire during a practice launch last year. (info from Reuters and other sources)
Posted by Michael N. Marcus at 5:49 AM