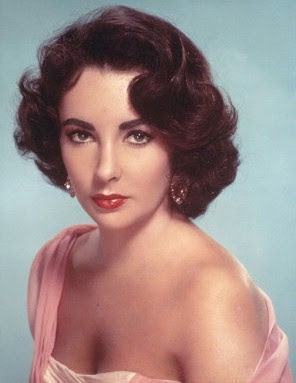 In 2004, her boyfriend was said to be Mexican attorney Victor Luna,

Liz won her first Oscar for playing a hooker in Butterfield 8 (1960), a movie she has said she despised. Cleopatra (1963) won her Richard Burton -- they married and co-starred in eight movies and a TV mini-series (Divorce His, Divorce Hers) before divorcing, remarrying, and divorcing again. Most of the Taylor/Burton movies were duds, but Who's Afraid of Virginia Woolf? won her another Oscar.

More recently, she spoke Maggie's only word on The Simpsons, and played Fred's mother-in-law in The Flintstones (1994). She describes Michael Jackson as her dearest friend; she is his son's godmother, and she married her eighth husband, Larry Fortensky, at Jackson's Neverland Ranch. Mattel made an Elizabeth Taylor Butterfield 8 doll, possibly the company's only prostitute product. (info from Wikipedia and nndb.com; photo from Pictorial Press)
Posted by Michael N. Marcus at 5:14 AM