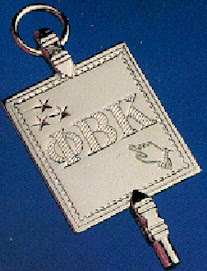 Academic honorary society Phi Beta Kappa was founded as a social club at the College of William and Mary in Virginia in 1776. It later evolved into the US's most prestigious organization of undergraduate students, with chapters on hundreds of campuses. The Greek letters Phi, Beta, and Kappa, which appear on members' gold keys, stand for the Greek words meaning "philosophy the guide to life."

ΦBK was the first society to have a Greek-letter name, and it introduced the essential characteristics of such societies: an oath of secrecy, a badge, mottoes in Greek and Latin, a code of laws, an elaborate form of initiation, a seal, and a special handclasp. The organization was created as a secret society so that its founders would have the freedom to discuss any topic they chose. Freedom of inquiry has been a hallmark of ΦBK ever since.

Although the original society at William and Mary lasted only four years, ending when the approach of the British army forced the college to close, it had already admitted fifty members, held seventy-seven meetings — mostly literary exercises and debates — and granted charters for new chapters at Yale and Harvard.

The two New England chapters preserved the essential qualities of the Virginia society. Shortly before the end of each academic year, the graduating members selected a small group of student leaders from the rising senior class to carry on the organization. In 1831, after anti-Masonic agitation prompted much discussion about the ΦBK oath, Harvard dropped the requirement for secrecy — an action that probably saved the Society from further open criticism and from rivalry with social fraternities that started around that time.

Other chapters were added gradually, and the number nationwide stood at 25 in 1883, when the National Council of the United Chapters of Phi Beta Kappa was created. At about the same time, the first women and African-Americans were inducted into the Society. The first chapters to induct women were at the University of Vermont, in 1875, and at Connecticut’s Wesleyan University, in 1876. The first known African-American was inducted by the Vermont chapter in 1877.

The ideal Phi Beta Kappan has demonstrated intellectual integrity, tolerance for other views, and a broad range of academic interests. The Phi Beta Kappa Society recognizes three types of members: members in course, alumni members, and honorary members. Membership in the Society is for life.

Members "in course" are elected on the basis of their academic records as college seniors, juniors, or — rarely — Ph.D. candidates. To be eligible for election, students must have pursued a broad program of study in the liberal arts and sciences and met other academic criteria as required by the electing chapter. Typically, no more than 10 percent of the candidates for degrees in liberal arts and sciences are elected. Each year, about one college senior in a hundred, nationwide, is invited to join Phi Beta Kappa.

Seventeen US presidents (Including Bill Clinton and Bush #1, but not Dubya) and six of the nine current US Supreme Court Justices are Phi Beta Kappa members. Here are some more: