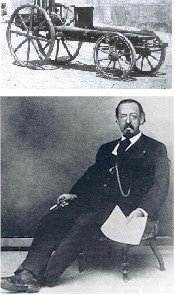 Traditionally, Carl Benz (of Mercedes Benz) is credited with inventing the car. He built a three-wheeled car in 1885 and sold his first one two years later, and went into production with a four-wheeled model in 1890.

But Benz wasn't first. In 1864, Siegfried Marcus began working on cars. He made his first one in 1870. His second car, built in 1888/89 was rediscovered in 1950, and it could still be driven. The car had been bricked up behind a false wall in the cellar of a Vienna museum to hide it from the Nazis. Marcus was Jewish, and the Nazis intended to destroy his car and any literature describing it.

Siegfried Marcus is an inventor of enormous importance to contemporary civilization, but he's missing from most school books.

Machines employing his inventions can be numbered in the billions.

Trucks and buses, automobiles and lawnmowers, motorboats and chainsaws - in fact every mechanism employing an internal combustion motor and its carburetor, magneto ignition, and spark plugs, is derived from patents granted to Marcus. They are but a few of his 158 significant inventions.

Millions of vehicles crowding the world's roads are descendants of the original vehicles produced by Siegfried Marcus. It would appear that, of all of Marcus' revolutionary inventions, the internal combustion engine alone is so central to modern civilization that the name of its inventor would be as familiar as Watt or Whitney or Edison. The fact that so many other industrial and communication innovations are attributable to Marcus makes the rarity of the appearance of his name even more remarkable.

Siegfried Samuel Marcus (1831 – 1898) was a German inventor and automobile pioneer who lived most of his life in Austria (then, the Austro-Hungarian Empire).

From 1856 to 1898 he manufactured scientific instruments in Vienna. He developed an interest in electricity and made improvements in ignition devices and telegraph systems. His portable telegraph was valuable for military field communications, and used by the Prussian army.

In 1870 he put an internal combustion engine on a cart, making it the first gasoline-powered vehicle, the “First Marcus Car”.

In 1883 a patent for a magneto ignition was granted to Marcus in Germany. This design was used for all further engines and the “Second Marcus Car” of 1888/89. It was this ignition in conjunction with the “rotating brush carburetor” that made the second car's design very innovative.

In 1887, Marcus began a business venture with Märky, Bromovsky & Schulz, a company based in Moravia (eastern half of today's Czech Republic). They offered two stroke and four stroke engines of the Marcus type.

In 1888/89 Märky, Bromovsky & Schulz built the “Second Marcus Car” which can be seen in Vienna's Technical Museum. This car made Marcus well known all over the world.

Marcus was the holder of 131 patents in 16 countries, but he never applied for a patent for the car, and never claimed inventing the car.

Marcus was buried at the Protestant Cemetery at Hütteldorf, Vienna. Later, his remains were transferred to an “Honorary Tomb” of Vienna's Central Cemetery.

Because of Marcus’ Jewish ancestry his name and all memorabilia vanished under the Nazis. The memorial in front of the Vienna Technical University was removed. After the war, the monument was rebuilt. In 1950, the Second Marcus Car had a major restoration.

In 1992 Marcus was honored in Malchin, Germany the city where he was born, by the renaming of a school for him. The Siegfried Marcus Realshule Malchin is a trade school for talented students from the fourth through ninth grades. The school was outfitted with a computer room and a chemical laboratory and claimed to be worthy "of the great researcher and inventor" for whom it was named. A small museum dedicated to publicizing the accomplishments of Siegfried Marcus was part of the refurbishing of the school.

A Siegfried Marcus Society was founded in Austria in 1998 by a self-declared "young and committed group... [formed] to provide a public rectification of the long-enduring injustice done to the ingenious creator and inventor of the automobile, Siegfried Marcus."

(info from University of Houston, Hebrew History Federation, and Wikipedia)
Posted by Michael N. Marcus at 4:47 AM

Well Marcus, are you related to Siegfried or not?

Absolutely, and you are, too.

Actually "my" Marcus is an artificial name, picked when my paternal grandfather's generation arrived in the US from Russia (or from Poland, depending on the day the map was printed). "Marcus" replaced a name with about 14 consonants and one vowel.

If I am related to Siegfried, the connection is more likely from my mother's German side, but they were Brauns and Schwarzes, not Marcuses.