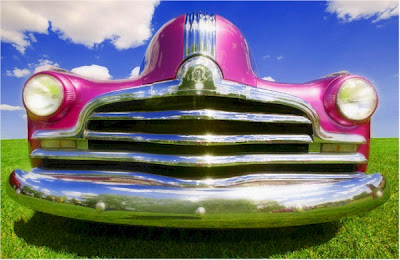 At one time, Cuba was the largest importer of American cars. That ended in 1960, when the Eisenhower administration imposed a ban on US exports to the island following Fidel Castro’s rise to power.

Today, Cuba is a living reminder of 1950s Detroit power, with about 30,000 aging and ancient American vehicles in daily use. About half of the old cars are from the 1950s, with Chevrolets dominating other brands. Another 25 percent are from the 1940s, and the remainder are older. Some look like they just left the showroom, others are a hodgepodge of parts, perhaps a Chevy with an engine from a Russian tractor, or a Plymouth with wooden bumpers, being towed by a pair of donkeys.

Since the embargo, Cuba has had cars from other countries, mostly Russia; but few have lasted more than a few years. Many American cars, however, still run perfectly today. The car is the main source of revenue for many Cubans, since they can transport tourists for up to $50 per day in an economy where the average Cuban makes $15-25 a month. The cost of owning a car is high, especially with gasoline costing $8 a gallon. But with high gas prices, some gas stations are beautiful, with fresh, clean paint on the walls, standing out conspicuously from a scene of intense poverty.

Rick Shnitzler, founder of TailLight Diplomacy (TLD), says Cuban owners of antique autos would represent a good market for US spare parts, both originals and reproductions, if US firms were again free to do business with Cuba.

For now, however, the trade embargo on Cuba remains, and all Shnitzler can do is dream, and occasionally help out his like-minded counterparts in Havana.

"Recently, we were able to deliver copies of original factory-issued sales brochures which will enable Cuba to restore its oldest car, a 1905 Cadillac Model F Touring, to factory specifications," he said.

Since its formation in 2000, the nonprofit TLD has pushed hard for lifting of the US ban on travel to Cuba. "TLD seeks to create the conditions for Americans to meet their Cuban peers face-to-face," a fact sheet about the organization says. “TLD advocates that Cubans conserve and maintain their existing fleet of pre-1960s American cars, trucks and motorcycles, and that Americans join with Cubans to restore (them)" (some info from Havana Journal and Dan Heller Photography)
Posted by Michael N. Marcus at 5:45 AM