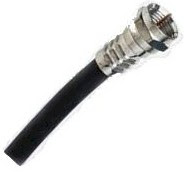 CATV is now the abbreviation for Cable Television. Originally it meant Community Antenna Television, and it started just under 60 years ago.

Service Electric Company was formed by John and Margaret Walson in the mid 1940s to sell, install and repair General Electric appliances in the Mahanoy City area of Pennsylvania. In 1947, they began selling television sets. It was very difficult or even impossible to receive the three Philadelphia channels in Mahanoy City because the town is 86 muiles from Philly and surrounded by mountains.

Walson erected a utility pole with an antenna on a nearby mountain so he could demonstrate television. In June of 1948, he successfully connected the antenna to the store as well as to several homes along the cable path.

His experiences as a Pennsylvania Power & Light field employee and his degree in electronics proved beneficial in starting the nation's first CATV system. People who lived in the small mountainous towns of northeastern Pennsylvania could now receive three Philadelphia channels in their homes or could congregate outside the Walson's appliance store to view the new communication medium.

Walson was recognized by the US Congress and the National Cable Television Association as the founder of the cable television industry. Walson was also the first cable operator to use microwave to import distant television stations, to use coaxial cable for improved picture quality, and to distribute pay television programming (HBO).

Today, Service Electric Television is a private, family owned cable business servicing about 300,000 subscribers in about 250 communities in Central and Northeastern PA and Northwestern NJ.

Service Electric served Bethlehem PA when I was a student at Lehigh University in the late 1960s. The company seldom disconnected cables when a student moved out of an apartment, and lost money when new students moved in and connected their TVs to the still-live cable provided for the previous tenant. Some enterprising students became unofficial re-sellers, by running cable to other apartments, and charging half of the Service Electric fee.
Posted by Michael N. Marcus at 5:03 AM