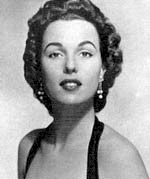 Bess Myerson (born 1924) was the first (and, so far, only) Jewish Miss America. She went on to become a popular television personality, a public servant, and a philanthropist.

Myerson encountered anti-Jewish prejudice during the Miss America Pageant, when an official tried to convince her to change her name to one that was less ethnic. She refused. Myerson was the first recipient of a Miss America scholarship, but none of the pageant's sponsors were willing to use beauty from the Bronx as a spokesperson. During her year as Miss America, Myerson made many personal appearances. One was scheduled at an southern country club, but just before the event, she was told that the country club was restricted, and no Jewish person could go there.

Myerson, determined to fight racial bigotry, traveled around the country speaking in behalf of the Anti-Defamation League of B'nai B'rith, in cooperation with the NAACP and the Urban League.

Many Americans remember Myerson's TV career as Mistress of Ceremonies for "The Big Payoff" (1951-9) and as a panelist on "I've Got A Secret" (1958-67). From 1969-73 as Commissioner of Consumer Affairs of New York City, Myerson was architect of the most far-reaching consumer protection legislation in the country at that time, and she was put on the cover of Life Magazine as "A Consumer's Best Friend." From 1983-87 Myerson served under Mayor Ed Koch as Commissioner of Cultural Affairs, where she substantially broadened financial support for New York City's art community.

Myerson is a Founder of The Museum of Jewish Heritage in New York, where she established the Bess Myerson Film and Video Collection. Her concern over racial and religious tensions on college campuses led her to endow the Bess Myerson Campus Journalism Awards given annually by the Anti-Defamation League.

Myerson's presidential appointments include Lyndon Johnson's White House Conference on Violence and Crime, Gerald Ford's Commission on the National Center for Productivity and Quality of Working Life, and Jimmy Carter's Commissions on Mental Health and on World Hunger. She has served on the boards of the International Rescue Committee, the Consumers Union and Another Mother for Peace. Hunter College, where Myerson graduated in the same year that she was crowned Miss America, later presented her with an honorary doctorate, as did Long Island University and Seton Hall. (info from The Jewish American Hall of Fame)
Posted by Michael N. Marcus at 4:30 AM