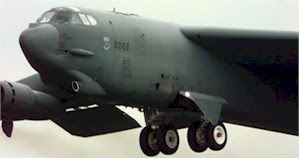 The Boeing B-52 Stratofortress is now its fifth decade of operational service. The newest planes were made 45 years ago, and are older than their flight crews. The eight-engine, 390,000-pound jet was the country's first long-range, swept-wing heavy bomber. It began as an intercontinental, high-altitude nuclear bomber, and its operational capabilities were adapted to meet changing needs.

B-52s have been modified for low-level flight, conventional bombing, extended-range flights and transport of improved defensive and offensive equipment -- including ballistic missiles that can be launched hundreds of miles from their targets.

It had a rocky beginning. The original XB-52 design, selected by the Army Air Forces in 1946, was for a straight-wing, six-engine, propeller-powered heavy bomber. On Oct. 21, 1948, Boeing Chief Engineer Ed Wells and his design team were in Dayton, Ohio, when the Air Force's chief of bomber development told them to scrap the propellers and come up with an all-jet bomber. Over the following weekend, in a Dayton hotel room, the team designed a new eight-engine jet bomber, still called the B-52, made a scale model out of balsa wood and prepared a 33-page report.

This effort impressed the Air Force's Air Material Command, and the design was approved. As the war worsened in Korea, the Air Force, in 1951, designated the B-52 the country's next intercontinental bomber and approved an initial production order for 13 B-52s. The first prototype flew on 15 April 1952.

Production versions of the B-52A were B-52Bs, with more weight and larger engines. Some had photographic reconnaissance or electronic capsules in their bomb bays and were redesignated RB-52Bs. The B-52s increased in range, power and capability with each variant. The B-52H made its first flight March 6, 1961, and is still in service. In all, 744 B-52s were produced by Seattle, Wash., and Wichita, Kan., plants between 1952 and 1962.

Ongoing updates since beginning military service have included new avionics, data-link communications, electronic defense and offensive systems, and more powerful, fuel-efficient turbofan engines. The B-52 has been the longest-serving bomber in US history.

The official name Stratofortress was rarely used, and personnel involved with the aircraft most commonly referred to it as BUFF (Big Ugly Fat/Flying Fuck/Fucker/Fellow). (info from Boeing and Wikipedia)
Posted by Michael N. Marcus at 5:34 AM