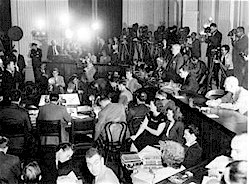 The Committee was established in 1938. Its work was supposed to be aimed mostly at American involvement in Nazi and Ku Klux Klan activity, but actually did little about the Klan, and is best known for searching for communists, and terrorizing people in show business.

HUAC became a standing (permanent) committee in 1946. Under the mandate of Public Law 601, passed by the 79th Congress, the committee of nine representatives investigated suspected threats of subversion or propaganda that attacked "the form of government guaranteed by our Constitution."

Under this mandate, the committee focused its investigations on real and suspected communists in positions of actual or supposed influence in American society. The first investigation looked into allegations of communists in the Federal Theatre Project. In 1938, Hallie Flanagan, head of the Project, was subpoenaed to appear before the committee to answer the charge that the project was overrun with communists. One of the committee members stupidly asked Flanagan whether the Elizabethan playwright Christopher Marlowe was a member of the Communist Party.

A significant step for HUAC was its investigation of the charges of espionage brought against Alger Hiss in 1948. This investigation ultimately resulted in Hiss's trial and conviction for perjury, and convinced many of the usefulness of congressional committees for uncovering Communist subversion.

In 1947, the committee held nine days of hearings into alleged communist propaganda in the Hollywood motion picture industry. After conviction on contempt of Congress charges for refusal to answer some questions posed by committee members, the "Hollywood Ten" were blacklisted by the industry. Eventually, more than 300 artists — including directors, radio commentators, actors and particularly screenwriters — were boycotted by the studios. Some, like Charlie Chaplin, left the US to find work. Others wrote under pseudonyms or the names of colleagues. Only about ten percent succeeded in rebuilding careers within the entertainment industry.

In 1947, studio executives told the Committee that wartime films like Mission to Moscow and Song of Russia could be considered pro-Soviet propaganda, but they suggested that the films were valuable in the context of the Allied war effort. In the 1950s, the studios produced a number of anti-communist and anti-Soviet propaganda films like The Red Menace, I Married a Communist, and I Was a Communist for the FBI. Most were box-office failures, but placated Hollywood's critics and protected the industry against a threatened boycott campaign.

HUAC lost considerable prestige after it subpoenaed Jerry Rubin and Abbie Hoffman of the Yippies in 1967, and again in the aftermath of the 1968 Democratic National Convention. Unlike previous subjects of the committee's investigations, the Yippies neither respected nor feared the Committee, and used media attention to make a mockery of the proceedings.

Rubin came to one session dressed as an American Revolutionary War soldier, and passed out copies of the United States Declaration of Independence to people in attendance. Then Rubin "blew giant gum bubbles while his co-witnesses taunted the committee with Nazi salutes." Hoffman attended a session dressed as Santa Claus. On another occasion, police stopped Hoffman at the building entrance and arrested him for wearing an American flag. Hoffman quipped for the press, "I regret that I have but one shirt to give for my country," paraphrasing the last words of revolutionary patriot Nathan Hale; meanwhile Rubin, who was wearing a matching Viet Cong flag, shouted that the police were communists for not arresting him also.

In the fifties, the most effective sanction was terror. Almost any publicity from HUAC meant the 'blacklist.' Without a chance to clear his name, a witness would suddenly find himself without friends and without a job. But it is not easy to see how in 1969 a HUAC blacklist could terrorize an SDS activist. Witnesses like Jerry Rubin have openly boasted of their contempt for American institutions. A subpoena from HUAC would be unlikely to scandalize Abbie Hoffman or his friends.

In 1969, the House changed the committee's name to the Committee on Internal Security. When the House abolished the committee in 1975, its functions were transferred to the House Judiciary Committee. (info from Wikipedia; photo from Temple University)
Posted by Michael N. Marcus at 6:04 AM