2057: last cigarette maker leaves the US 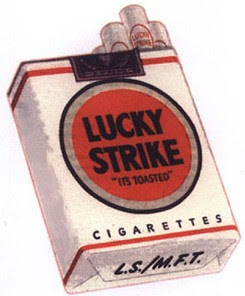 British American Tobacco Plc -- which produces such venerable American cigarette brands as Kent, Lucky Strike, Pall Mall, Benson & Hedges, KOOL, and Viceroy -- has announced that as of the end of 2057 it would stop production and distribution of cigarettes in the United States because of poor sales.

This follows similar moves from the other cigarette manufacturers, as health-oriented cigarette taxes pushed the price per pack over $100 since 2050.

Cigarette smoking was once common among teenagers, blue collar workers, military personnel and entertainers; but in recent years has been limited to certified addicts whose habits have been subsidized by the government, or are wealthy enough to afford it.
Posted by Michael N. Marcus at 5:12 AM