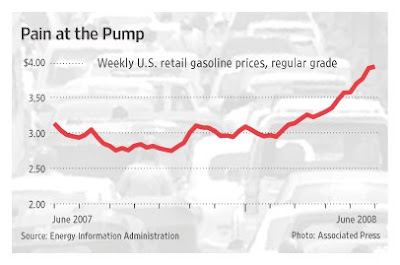 The average price of gasoline in the US reached $4 a gallon for the first time Sunday, the latest milestone in a run-up in fuel prices that is sapping consumer confidence and threatening to put the nation into recession, if it's not there already.

The record nationwide average for regular-gasoline prices, announced by the AAA, follows Friday's near-$11 surge in oil prices to a record $138.54 a barrel. Both are part of what, by some measures, is the worst energy-price shock Americans have faced for a generation, in terms of its toll on their pocketbooks.

In recent days, soaring fuel prices and disappointing employment data have reignited fears that the nation's economy -- which has taken a pounding over the past year from a housing downturn, credit crunch and weakening job market -- will slip into recession, or pull back further if a recession is already under way. Rising fuel prices are straining household budgets, damping the spending that drives more than two-thirds of the nation's economic activity.

Gasoline prices, which have risen 29% over the past year, have been high for months, and in some markets, such as Alaska and California, consumers have been paying more than $4 a gallon at the pump for weeks. But the latest increase at the nationwide level from a previous average of nearly $3.99 a gallon seems likely to deliver at least a psychological blow to many Americans.

The current drain on consumers' income from rising fuel prices is greater than it was during most of the worst energy-price run-ups of the past. Spending on fuel as a share of wage income has shot above 6%. That exceeds the percentage seen during the 1974-75 and 1990-91 oil-price shocks and approaches the 7% to 8% seen during the 1980-81 price surge.

Some economists hold out hope the current oil-price surge won't be as devastating as some in the past. For one thing, consumers and businesses are far more fuel-efficient today than they were during the oil shock of the mid-1970s, requiring half as much energy to produce a unit of economic output.

Oil prices have been rising steadily from around $30 a barrel in 2003, at the start of the Iraq war. But the first few years of those increases occurred in "a period of strong growth, rising credit availability and rising house prices," said Jan Hatzius, chief US economist at Goldman Sachs.

The key question: Will oil prices go back down, or remain elevated for the long run? A swift plunge in oil prices, even back to the relatively high level of $100 a barrel, would send gasoline costs lower and ease pressure on consumers and improve confidence.

But if oil stays above $135 a barrel and gasoline tops $4 a gallon into the fall, that could reshape businesses and lead Americans to change their spending patterns in broader ways.

Already, auto makers, airlines, chemical companies and others that rely on oil are feeling the pain. Last week, Continental Airlines said it would cut 3,000 jobs, slash capacity by 11% and remove 67 airplanes from its fleet because of soaring jet-fuel prices. The move followed similar moves to cut capacity by United Airlines and American Airlines. Dow Chemical is planning to raise its product prices up to 20% as a result of soaring costs for crude oil and natural gas. (info from The Wall Street Journal)

Yesterday, on the way home from a weekend trip, I paid a frightening $4.60 per gallon of Mobil near the Bear Mountain Bridge in northern Westchester County, New York. At that greedy price I didn't fill up. I just bought enough to get me to Costco where I could buy some more gas at the "bargain" price of $4.07.
Posted by Michael N. Marcus at 5:57 AM