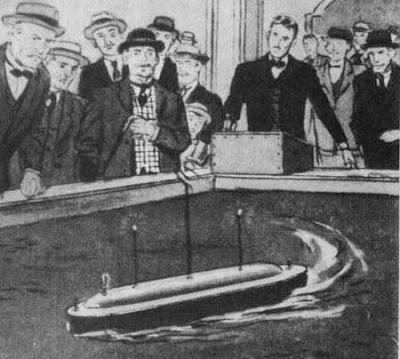 On May 25, 2008 after a 422-million-mile journey from Earth, NASA's Phoenix spacecraft delivered a robot researcher on Mars. Only five of Earth's 11 previous attempts to land on Mars were successful.

In 1997 the NASA robot Sojourner landed on Mars and became the first radio-guided vehicle to roam the Red Planet.

Radio remote controlled robots actually started roaming around much earlier, when Nikola Tesla demonstrated the invention of the robot in New York City.

In 1898 he filed and was granted a patent which described radio remote control for use in guided vehicles. Space exploration developed from his invention.

Tesla publicly demonstrated his first working model of a robot boat in a pool of water to astonished viewers at the Electrical Exposition at Madison Square Garden in May 1898. This was front page news at that time. It was the first time that radio waves were used to guide a movement of a robot, and 11 years before Marconi was awarded the Nobel Prize for the discovery of radio in 1909.

This historic moment New York City showed what could be achieved by using radio waves, and was the beginning of robotics, radio guided missiles and remote control.

Tesla built a laboratory in Colorado in 1899, to experiment with high frequency electricity and other phenomena. He received and recorded cosmic radio waves. He announced that he received extraterrestrial radio signals. The scientific community did not believe him, because knowledge of cosmic rays did not exist at that time. (info from The Tesla Society, illustration from Popular Science - July 1956)
Posted by Michael N. Marcus at 5:49 AM