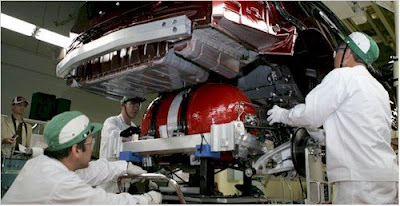 On Monday, Honda celebrated the start of production of its FCX Clarity, the world’s first hydrogen-powered fuel-cell vehicle intended for mass production. It looks like an ordinary family sedan, costs more to build than a Ferrari and may have just moved the world one step closer to a future free of petroleum.

Honda said even the small initial production run represented progress toward a clean-burning technology that many rejected as too exotic and too expensive to gain wide acceptance. “We can mass produce these now,” said Kazuaki Umezu, head of Honda’s Automobile New Model Center, where the FCX Clarity is built. “We are waiting for the infrastructure to catch up.”

Fuel-cell vehicles have been a sort of holy grail of the auto industry, offering the promise of driving without polluting. Fuel cells work by combining hydrogen and oxygen from ordinary air to make electricity, in a process whose only byproducts are water and heat. They have drawn renewed attention in an era of climate change, $140 a barrel oil, and rising competition for dwindling fossil fuels.

“This is a must-have technology for the future of the earth,” said Takeo Fukui, Honda’s president. “Honda will work hard to mainstream fuel-cell cars.”

Fuel cells have an advantage over electric cars, whose batteries take hours to recharge and use electricity, which, in the case of the United States, China and many other countries, is often produced by coal-burning power plants.

Honda says its FCX Clarity can be filled easily at a pump, can drive 280 miles on a tank, almost as far as a gasoline car. It also gets higher fuel efficiency than a gasoline car or hybrid, the equivalent of 74 miles a gallon of gas, according to the company.

But the technology has faced many hurdles, not the least of which has been the prohibitive cost of the fuel cells. Honda says it has found ways to mass produce them, which promises to drive down costs through economies of scale. On Monday, it showed reporters its fuel-cell production line, which resembled a semiconductor factory more than an auto plant with its humming automated machinery and white smocked workers in dust-free rooms.

Fukui said the cars cost several hundred thousand dollars each to produce, though he said that should drop below $100,000 in less than a decade as production volumes increase. In the meantime, the car company will be effectively subsidizing its customers, who will lease the vehicles for $600 a month. That is not much more than the leasing price of one of Honda’s top Acura line of luxury cars.

At Monday’s ceremony, Fukui presented an oversize key to the first FCX Clarity customer, a film producer from Los Angeles. Honda said it would offer the car in Southern California first because the state has been a leader in building hydrogen filling stations.

Honda said the five had been chosen after the company got a wave of queries from American consumers when it publicized the car last year. On Monday, Honda also announced three dealerships near Los Angeles that will be the first to start leasing FCX Claritys.

Fuel-cell vehicles have been a big gamble for Honda, which has spent the last 16 years and millions of dollars. For a time, the company was criticized for pouring money into unproven technologies while refusing to follow the rest of the industry into large sport utility vehicles and pickup trucks.

Now, with gas prices soaring, Honda is in an enviable position of not being burdened with large inventories of gas-guzzling trucks that require hefty incentives to sell, or the factories that build them. Analysts have said Honda and the rival Japanese carmaker Toyota have seized a commanding lead in more efficient, green technologies like hybrids as well as fuel cells.

Honda says one big breakthrough was shrinking the size of its fuel cells. In the FCX Clarity, they fit in a box-shaped unit the size of a desktop PC that weighs about 150 pounds, less than half of their size a decade ago.

The FCX Clarity’s fuel-cell unit can generate up to 100 kilowatts of electricity, enough to accelerate the car from zero to 60 miles an hour in less than nine seconds, and give it top speeds of 100 miles an hour, Honda says. Even at high speed, the FCX Clarity, a four-door sedan that looks like a sleeker version of the Accord, drives with the hushed whine of a golf cart.

Honda said a big remaining hurdle to true mass production is the lack of filling stations that sell hydrogen. Even in California, where the state government has led a push to build hydrogen stations, there are still very few public stations, Honda said. That will make it hard to drive the car far from home, limiting its appeal, the company said.

For now, the first batch of customers seem drawn by the car’s novelty as much as anything else. The first owner, film producer Ron Yerxa, said he did not plan to drive it far, just to work and to eat out — far enough to draw admiration of passers-by. “When I drive it to breakfast, people will ask about it,” Yerxa said. “They’ll want one, too.” (info and photo from The New York Times)
Posted by Michael N. Marcus at 4:10 AM