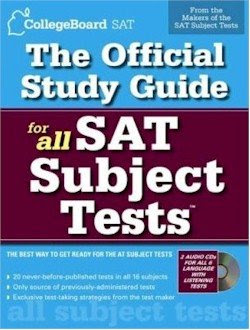 Originally used mainly by colleges and universities in the northeastern United States, the SAT was developed as a way to eliminate test bias between people from different socio-economic backgrounds.

The first administration of the SAT occurred on June 23, 1926, when it was known as the Scholastic Aptitude Test. This test, prepared by a committee headed by Princeton psychologist Carl Brigham, had sections of definitions, arithmetic, classification, artificial language, antonyms, number series, analogies, logical inference, and paragraph reading. It was administered to over 8,000 students at over 300 test centers. Men composed 60% of the test-takers. Slightly over a quarter of males and females applied to Yale University and Smith College respectively. The test was paced quickly, with 315 questions asked in about 90 minutes.

In 1930 the SAT was first split into the verbal and math sections, a structure that would continue through 2004. The verbal section of the 1930 test covered a more narrow range on content than its predecessors, examining only antonyms, double definitions (somewhat similar to sentence completions), and paragraph reading.

In 1936, analogies were re-added. Between 1936 and 1946, students had between 80 and 115 minutes to answer 250 verbal questions (over a third of which were on antonyms). The mathematics test introduced in 1930 contained 100 free response questions to be answered in 80 minutes, and focused primarily on speed. From 1936 to 1941, like the 1928 and 1929 tests, the mathematics section was eliminated entirely. When the mathematics portion of the test was re-added in 1942, it consisted of multiple choice questions

Paragraph reading was eliminated from the verbal portion of the SAT in 1946, and replaced with reading comprehension, and "double definition" questions were replaced with sentence completions.

In 1959 questions on data sufficiency were introduced to the mathematics section, and then replaced with quantitative comparisons in 1974. In 1974 both verbal and math sections were reduced from 75 minutes to 60 minutes each, with changes in test composition compensating for the decreased time

The inclusion of the "Strivers" Score study was implemented. This study was introduced by The Educational Testing Service, which administers the SAT, and has been conducting research on how to make it easier for minorities and individuals who suffer from social and economic barriers.

The original "Strivers" project, which was in the research phase from 1980 - 1994, awarded a test-taker who was identified as a minority an additional 10 - 200 points, depending on the race and gender.

The belief was that this would give minorities a better chance at being accepted in to a college of higher standard, i.e. an Ivy League school. In 1992, the Strivers Project was leaked to the public; as a result the Strivers Project was terminated in 1993. After Federal Courts heard arguments from the ACLU, NAACP and the Educational Testing Service, the courts ordered the study to alter its data collection process, stating that only the age, race and zip code could be used to determine the test-takers eligibility for "Strivers" points. These changes were introduced to the SAT effective in 1994.

In 1994 the verbal section received a dramatic change in focus. Among these changes were the removal of antonym questions, and an increased focus on passage reading.

The average score on the 1994 modification of the SAT I was usually around 1000 (500 on the verbal, 500 on the math). The most selective schools in the United States (for example, those in the Ivy League) typically had SAT averages exceeding 1400 on the old test.

In 2005, the test was changed again, largely in response to criticism by the University of California system. Because of issues concerning ambiguous questions, especially analogies, certain types of questions were eliminated (the analogies from the verbal and quantitative comparisons from the Math section).

The test was made marginally harder, as a corrective to the rising number of perfect scores. A new writing section, with an essay, based on the former SAT II Writing Subject Test, was added, in part to increase the chances of closing the opening gap between the highest and midrange scores. Other factors included the desire to test the writing ability of each student in a personal manner; hence the essay.

The New SAT (known as the SAT Reasoning Test) was first offered on March 12, 2005, after the last administration of the "old" SAT in January of 2005. The Mathematics section was expanded to cover three years of high school mathematics. The Verbal section's name was changed to the Critical reading section.

In 1990, because of uncertainty about the SAT's ability to function as an intelligence test, the name was changed to Scholastic Assessment Test. Finally, in 1994, the name was changed to simply SAT (with the letters not standing for anything). Now the test is commonly referred to as the SAT Reasoning Test. The scoring categories are now the following: Reading, Math, Writing, and Essay. The essay has its own score now.

The test scoring was initially scaled to make 500 the mean score on each section with a standard deviation of 100. As the test grew more popular and more students from less rigorous schools began taking the test, the average dropped to about 428 Verbal and 478 Math. The SAT was "recentered" in 1995, and the average "new" score became again close to 500. Scores awarded after 1994 and before October 2001 are officially reported with an "R" (e.g. 1260R) to reflect this change. Old scores may be recentered to compare to 1995 to present scores by using official College Board tables, which in the middle ranges add about 70 points to Verbal and 20 or 30 points to Math. In other words, current students have a 100 (70 plus 30) point advantage over their parents.

A famous example of alleged bias in the SAT I is the oarsman-regatta analogy question. The object of the question was to find the pair of terms that have the relationship most similar to the relationship between "runner" and "marathon". The correct answer was "oarsman" and "regatta".

The question relied upon students knowing the meaning of the two terms, referring to a sport popular with the wealthy. Fifty-three percent (53%) of white students correctly answered the question, and 22% of black students did. Analogy questions have since been replaced by short reading passages.

A few liberal arts colleges have responded to this criticism by joining the "SAT optional movement" and do not require the SAT for admission. (info from Wikipedia)
Posted by Michael N. Marcus at 4:07 AM