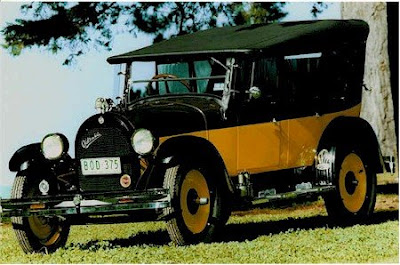 In 1923, gasoline was typically selling for 20 to 25 cents a gallon. In the summer, gas reached 29 cents a gallon in Rapid City, South Dakota. That price seems like an amazing bargain now, but by the standards of the day anything over 20 cents a gallon was considered exorbitant.

South Dakota's Republican governor Bill McMaster responded by ordering the state highway department to begin selling gas for 16 cents a gallon. He directed state employees to buy gasoline in Chicago and ship it west it by tank car.

The oil companies were outraged, and complained of "socialism," but the "Governor's Gas War" was successful in forcing prices down at the commercial pumps. Thereafter every time the gas stations tried to raise their prices McMaster responded with another state sale.

South Dakota's war on high gas prices received nationwide attention and triggered price reductions throughout the Midwest and eventually from coast to coast. Motorists were delighted with the low prices. South Dakota's politicians involved the state in several other projects normally reserved for the private sector including a cement plant, a coal mine, and grain elevators. The US Supreme Court finally stepped in and ruled that selling gas was not a proper function of state government.


Complete control and domination of the oil industry by the Standard Oil Companies, in violation of the 1911 dissolution decree of the Supreme Court, was charged by the La Follette Oil Investigation Committee in its report presented to the Senate after a three months' inquiry into conditions and prices in the oil business, also in 1923.

The methods of control as set forth in the report include division of marketing territory between the various Standard Oil Companies on almost the same basis as before the dissolution, ownership of the principal pipe lines, interlocking stock ownership, fixing of prices in the producing fields, excessive and discriminatory freight rates, and ownership of the basic patents for reducing crude oil to gasoline.

"If a few great oil companies are permitted to manipulate prices for the next few years as they have been doing since 1920," the report asserts," the people of this country must be prepared before long to pay at least a dollar a gallon for gasoline."

Prominent oil men in the Standard Oil companies in New York, headed by Walter C. Teagle, President of the Standard Oil Company of New Jersey, declared that dollar gasoline was an economic impossibility. (From kb0wyt.com & Time magazine)
Posted by Michael N. Marcus at 4:18 AM

Very interesting "state gas sale". Where did the state buy its gasoline stock? Is the state refine its gas and sale it to the public?

If this is so, state that are rich in gas reserve should start drilling and refining to rapidly bring down the cost of gas in the pump.