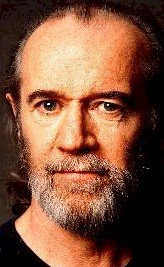 George Carlin, the dean of counterculture comedians whose biting insights on life and language were immortalized in his "Seven Words You Can Never Say On TV" routine, died of heart failure Sunday. He was 71.

Carlin, who had a history of heart trouble, went into St. John's Health Center in Santa Monica on Sunday afternoon complaining of chest pain and died later that evening. He had performed as recently as last weekend in Las Vegas.

"He was a genius and I will miss him dearly," said Jack Burns, who was the other half of a comedy duo with Carlin in the early 1960s.

Carlin's jokes constantly pushed accepted boundaries of comedy and language, particularly with his routine on the "Seven Words" -- all of which are taboo on broadcast TV and radio to this day. When he said all seven at a show in Milwaukee in 1972, he was arrested on charges of disturbing the peace, freed on $150 bail -- and typically unapologetic on his release.

A Wisconsin judge dismissed the case, saying the language was indecent but citing free speech and the lack of any disturbance.

When the words were later played on a New York radio station, they resulted in a Supreme Court ruling in 1978 upholding the government's authority to sanction stations for broadcasting offensive language during hours when children might be listening.

"So my name is a footnote in American legal history, which I'm perversely kind of proud of," he told The Associated Press.

Carlin served as host of the first epidsode of "Saturday Night Live" in 1975 and he appeared about 130 times on "The Tonight Show."

He produced 23 comedy albums, 14 HBO specials, three books, a few TV shows and appeared in several movies. Carlin hosted the first broadcast of "Saturday Night Live" and noted on his Web site that he was "loaded on cocaine all week long."

He won four Grammy Awards, each for best spoken comedy album, and was nominated for five Emmy awards. On Tuesday, it was announced that Carlin was being awarded the 11th annual Mark Twain Prize for American Humor.

When asked about the fallout from the 2004 Super Bowl halftime show that ended with Janet Jackson's breast-baring "wardrobe malfunction," Carlin said, "What are we, surprised?"

"There's an idea that the human body is somehow evil and bad and there are parts of it that are especially evil and bad, and we should be ashamed. Fear, guilt and shame are built into the attitude toward sex and the body," he said. "It's reflected in these prohibitions and these taboos that we have."

Carlin was born in 1937 and grew up in Manhattan, raised by a single mother. After dropping out of school in the ninth grade, he joined the Air Force in 1954. He received three court-martials and numerous disciplinary punishments, according to his website.

While in the Air Force he started working as an off-base disc jockey at a radio station in Louisiana, and after receiving a general discharge in 1957, took an announcing job at WEZE in Boston. His website says he was "Fired after three months for driving a mobile news van to New York to buy pot."

From there he went on to a job on the night shift as a deejay at a radio station in Texas. Carlin also worked a variety of temporary jobs including a carnival organist and a peanut brittle marketing director.

In 1960, he left with a Texas radio buddy, Jack Burns, for Hollywood to pursue a nightclub career as comedy team Burns & Carlin. He left with $300, but his first break came just months later when the duo appeared on the Tonight Show with Jack Paar. Carlin said he hoped to would emulate his childhood hero, Danny Kaye, the kindly, rubber-faced comedian who ruled over the decade that Carlin grew up in -- the 1950s -- with a clever but gentle humor reflective of its times.

Only problem was, it didn't work for him.

"I was doing superficial comedy entertaining people who didn't really care: Businessmen, people in nightclubs, conservative people. And I had been doing that for the better part of 10 years when it finally dawned on me that I was in the wrong place doing the wrong things for the wrong people," Carlin reflected recently as he prepared for his 14th HBO special, "It's Bad For Ya." (info from The Associated Press)
Posted by Michael N. Marcus at 4:26 AM