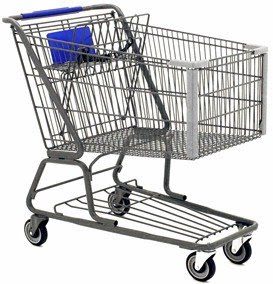 Sylvan N. Goldman (1898 - 1984) was an American businessman and inventor of the first shopping cart. He introduced the device on June 4, 1937, in the Humpty Dumpty supermarket chain in Oklahoma City, which he owned.

Goldman had long thought about how to expand the natural limits of a grocery shopper’s purchases. His stores, like others of that era, had a supply of wicker or wire market baskets. These baskets became heavy as they were loaded with food items, particularly for the woman buyer who did most of the shopping.

With the assistance of mechanic Fred Young, Goldman constructed the first shopping cart, basing his design on that of a wooden folding chair. They built it with a metal frame and added wheels and wire baskets. Another mechanic, Arthur Kosted, developed a method to mass produce the carts by inventing an assembly line capable of forming and welding the wire.

The cart was awarded patent number 2,196,914 on April 9, 1940 titled, "Folding Basket Carriage for Self-Service Stores". They advertised the invention as part of a new "No Basket Carrying Plan."

In an 1977 interview with Charles Kuralt, Sylvan N. Goldman recalled his reaction to seeing customers reject the shopping cart.

I got down to the store about 10 o’clock in the morning waiting for the time when people’ll start coming in, and this right on a Saturday when it’s your biggest day, and I knew that I’d be seeing people lined up at the door to get in to get the merchandise and see what the dickens it was. And when I got there, I went into our largest store, there wasn’t a soul using a basket carrier, and we had an attractive girl by the entrance that had a basket carrier and two baskets in it, one on the top and one on the bottom, and asked them to please take this cart to do your shopping with. And the housewives, most of them decided, “No more carts for me. I have been pushing enough baby carriages. I don’t want to push anymore.” And the men would say, “You mean with my big strong arms I can’t carry a darn little basket like that?” And he wouldn’t touch it. It was a complete flop.

The only people who accepted the shopping innovation at all were the elderly.

Over the weekend Goldman considered how to get public acceptance of his carriers, whose utility he did not doubt. “Wednesday evening it happened to dawn on me, an idea we put that into effect.” His goal was to show that the carts weren’t wheeled monsters. His plan was simple but effective.

Goldman said, "I hired for each store a young lady in her late twenties, another lady in her forties, and someone else about in their late fifties, and I hired a couple of men about thirty years old and about fifty years old and they were in the store, pushing the carts around. They had merchandise in the top basket, and bottom basket. These people were shopping right by the entranceway to the store."

Goldman replied: "That’s right, that’s exactly what it was. So, I told this young lady that was offering the carts to the customer to say, “Look, everybody is using them; why not you?” and immediately it became a huge success. All because of the fact that somebody else had to get the ball rolling.

Within a few weeks all the stores in Goldman’s chain were using the carts, and they were a huge success. Goldman began manufacturing shopping carts by the end of 1937. By 1940 Goldman had a seven-year waiting list for new shopping carts. Goldman's concept was simple: make shopping easier for the customer and they’ll visit the store more frequently, and buy more

Shopping carts became extremely popular and Goldman became a multimillionaire by collecting a royalty on every shopping cart in the United States until his patents ran out. (info from realcartu.com and Wikipedia)
Posted by Michael N. Marcus at 4:28 AM