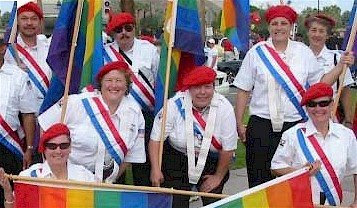 Barack Obama’s Presidential Inaugural Committee has chosen the Lesbian and Gay Band Association, with members from across the country, to march in the inaugural parade in Washington on January 20, 2009. It will be the first time that a gay and lesbian band will be marching in a presidential inauguration.

“We are extremely pleased to announce that the Lesbian and Gay Band Association will be included as a marching contingent in the Inaugural Parade,” says a message on the band’s website. “This is the first time that an LGBT group will be represented in a Presidential Inaugural Parade, truly our chance to make history.”

The Washington Blade newspaper said that Bill Clinton allowed gay groups to perform music on the sidewalk during his inauguration but not to march in the parade.

There were a record number of applicants to march in the 2009 parade — nearly 1,400 — with only a few dozen being selected. During the 2005 Dubya inaugural, about 340 bands applied to march and 47 were selected. (info from The New York Times)
Posted by Michael N. Marcus at 3:20 AM

I am very angry with the networks of this inauguration! Almost every channel went to commercial or cut to another scene when the gay and Lesbian band went by! I am very disappointed in the networks!