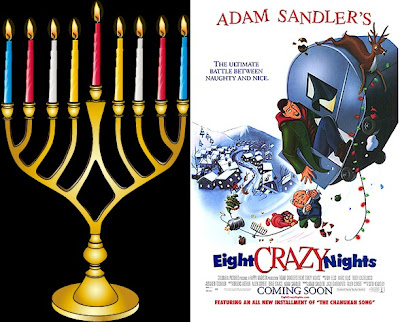 The Jewish festival of Chanukah (also spelled "Hanukka" etc.) commemorates the successful struggle for religious liberty, by Jews against Syrian oppressors, in 167 BCE (what Christians call "BC").

At around 200 BCE, Jews lived as an autonomous people in Israel ("Judea"), which was controlled by Syria. The Jewish people paid taxes to Syria and accepted its legal authority, and were free to follow their own faith and engage in trade.

By 175 BC Antiochus IV Epiphanes ascended to the throne. At first, little changed, but under his reign, the Temple in Jerusalem was looted, Jews were massacred, and Judaism was effectively outlawed. In 167 BCE Antiochus ordered an altar to Zeus erected in the Temple.

Some modern scholars argue that the king may have been intervening in an internal civil war between the traditionalist rural Jews and Hellenized (Greek-like) elite Jews in Jerusalem. They fought over who would be the High Priest, with traditionalists overthrown by Hellenizers. As the conflict escalated, Antiochus took the side of the Hellenizers by prohibiting religious practices the traditionalists had supported.

By 166 BCE Mattathias had died, and Judah took his place as leader. By 165 BCE the Jewish revolt was successful, and the Temple was liberated and rededicated. The Chanukah festival was instituted by Judah and his brothers to celebrate the event.

After recovering Jerusalem and the Temple, Judah ordered the Temple to be cleansed, a new altar to be built, and new holy vessels to be made.

Olive oil was needed to burn all night every night. It is said that there was only enough oil to burn for one day, yet it burned for eight days, the time needed to prepare a fresh supply of oil. An eight-day festival was declared to commemorate the apparent miracle. In recent years, some Jewish people have tied the holiday to energy conservation and using less oil.

The Hebrew word Chanukah can be translated as “dedication.” The holiday is also called the Festival of Lights, because candles are lit on each of eight successive nights. Menorah is a Hebrew word for "candelabra." The 9-socket menorah used for Chanukah is called a Chanukiyah.

Some people refer to Chanukah as "the Jewish Christmas," but the two holidays have nothing in common, except the time of year and (recently) gift-giving. Jewish comedian - actor - musician - screenwriter - producer Adam Sandler has recorded several popular editions of his Chanukah Song. First performed on Saturday Night Live, song variations share the theme of Jewish children feeling isolated during the Christmas season; and Sandler lists Jewish celebrities with often-corny rhymes.

Lyrics include: "David Lee Roth lights the menorah. So do James Caan, Kirk Douglas, and the late Dinah Shore-ah." and "Chanukah is the festival of lights. Instead of one day of presents, we get eight crazy nights."

In addition to those eight daily candles, a "servant" candle, or Shamas (rhymes with "Thomas") is lit first, and it is used to light the other candles. The candles are added to the menorah from right to left — the direction Hebrew is read. They are lit from left to right — to honor the new one first. The candle lighting is accompanyed by prayers and songs. The lights should be lit as soon as possible after nightfall, with all members of the family present. Children often light the candles.

The dreidel is a famous symbol of Chanukah, a four-sided top with one Hebrew letter on each face. Each letter is the beginning of a Hebrew word in the phrase Nes Godol Haya Sham, meaning “a great miracle happened there.” Various games can be played with the dreidel. Another Chanukah custom is to eat potato latkes (pancakes) because they are fried in oil. (info from AdasIsrael and Wikipedia)