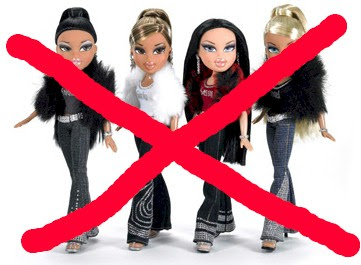 After a four-year legal battle, a federal judge has banned MGA Entertainment from making and selling its hugely popular Bratz dolls in a sweeping decision that favors rival toymaker Mattel.

US District Judge Stephen Larson ordered MGA Entertainment to immediately stop manufacturing the dolls but said it can wait until the holiday season ends to remove the toys from store shelves.

The decision was a stunning defeat for MGA, which exploded onto the tween scene in 2001 with the edgy dolls and made hundreds of millions in profits, giving Mattel's doll diva Barbie a run for her money.

The ruling, filed Wednesday, followed a jury's finding that Bratz doll designer Carter Bryant developed the concept while working for Mattel. The same jury later awarded Mattel $10 million for copyright infringement and $90 million for breach of contract after a lengthy trial stemming from Mattel's 2004 lawsuit ended in August. It was unclear if MGA planned to appeal Larson's ruling.

A Mattel attorney said the ruling was a huge victory for the toy giant, which has fought to neutralize the Bratz line for years. The dolls - with their huge lips, pug noses, almond-shaped eyes and coquettish figures - were an instant hit with young girls. MGA had taken Bryant's original four dolls and spun out a line of more than 40 characters, complete with accessories and related toys such as Bratz Boyz, Bratz Petz and Baby Bratz.

The judge's injunction named all 40 dolls in the Bratz line, including the four originals - Yasmine, Chloe, Sasha and Jade. Larson also ordered MGA to reimburse its vendors and distributors for the cost of the dolls and all shipping charges for sending them back.

During trial, Mattel attorneys said MGA made nearly $778 million on the Bratz line since it was introduced seven years ago, and company Chief Executive Isaac Larian made $696 million through June - but MGA insisted the profits were much less.

The post-trial dispute that prompted Wednesday's ruling centered on whether the jury found that only the first generation of four Bratz dolls infringed on Mattel's copyright or whether all the dolls in the line are in violation. The jury verdict form only asked panelists to find whether there was infringement and assign a dollar reward, but did not ask them to specify which dolls among the dozens MGA made violated the law. MGA, which no longer makes the first-generation dolls, argued that the later toys in the Bratz line don't violate the copyright and it could continue to sell them.

Both sides had a lot riding on the judge's decision and had worried about the impact of any ruling during the holiday shopping season. Mattel has seen sales of Barbie - once a rite of passage for American girls - slide since the Bratz dolls first came on the scene. Domestic sales of Barbie were down 15 percent in 2007.

MGA is also in litigation with its insurers for nearly $63 million in legal fees spent during the battle with Mattel. It has also countersued Mattel, alleging the toy giant's popular MyScene dolls are a copy of the Bratz brand. (info from The Associated Press)
Posted by Michael N. Marcus at 3:13 AM

I think this is stupid. Bratz are awesome! They have to keep selling them! Who else says plz 2 not stoping the Bratz?!