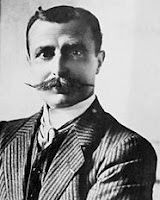 Louis Blériot (1872 – 1936) was a French inventor and engineer. In 1909 he completed the first flight across a large body of water in a heavier-than-air craft when he crossed the English Channel, receiving a prize of 1000 British pounds for doing so. He also is credited as the first person to make a working monoplane (single-wing airplane).

Blériot was a pioneer of the sport of air racing, invented automobile headlights and established a successful acetylene headlamp business, amassing a small fortune.

He used the money from his business to experiment with towed gliders on the Seine River, learning about aircraft and flight dynamics. His interest in aviation manifested itself when, in 1900, he built an ornithopter, which failed to take off.

Blériot and collaborator Gabriel Voisin formed the Blériot-Voisin Company. Active between 1903 and 1906, the company developed several unsuccessful and dangerous aircraft designs, which drained his finances.

Blériot then left and started creating his own airplanes, experimenting with various configurations, eventually creating the world's first successful monoplane, the Blériot V, but this model crashed easily. However, by 1909, he created the Blériot XI, which was more stable and was displayed at the Exposition de la Locomotion Aerienne in Paris in 1909.

After years of improving his piloting skills, Blériot decided to go after the coveted thousand-pound prize offered by the London Daily Mail for a successful crossing of the English Channel.

Blériot had two rivals for the prize, both of whom failed to reach the goal. The first was Hubert Latham, an Englishman residing in France. He was favored by both the United Kingdom and France to win. He had arrived first and attempted to fly across in July of 1909, but six miles from the shore at Dover he developed engine trouble and was forced to make a sea landing.

The other pilot, Charles de Lambert, was a Russian aristocrat with French ancestry, and one of Wilbur Wright's students. However, Lambert was injured in a major crash during a test flight, forcing him to quit the competition.

On July 25, 1909, the three rivals each arrived on the shores of Calais, France. Blériot had a badly burned foot from when a gasoline line broke during one of his trial runs, although he did not withdraw.

Before the trip, the French government allowed a destroyer to escort and observe his plane during the trip to Dover. Blériot used the Blériot XI, which was a structurally strong but simple and maneuverable monoplane of his design powered by a 3-cylinder Anzani radial engine with 25 horsepower and a 2-bladed fixed-pitch wooden propeller.

The flight started a little after 4:30 AM on July 25, 1909, when dawn broke. He reported that he throttled his engine to 1,200 revolutions per minute, almost the top speed of the engine, to clear telegraph wires at the edge of the cliff near the runway field. Then he lowered the engine speed to give the XI an average airspeed of approximately 40 miles per hour and an altitude of about 250 feet. Soon after, inclement weather began to form, with the Channel becoming rougher. Blériot lost sight of landmarks, and rapidly outpaced the destroyer escort. He stated: "I am alone. I can see nothing at all. For ten minutes, I am lost."

The landing was in turbulent weather, and Blériot encountered numerous problems: rain was cooling the engine, putting it in danger of being shut down, and strong wind was blowing him off course. As airspeed slowed for the landing, the gusts of wind nearly crashed his plane. The landing damaged his landing gear severely, along with the propellor, although the rest of the airplane was fine and the landing was deemed successful.

He flew 22 statute miles from Les Barraques (near Calais) to Dover. The trip took 37 minutes. Blériot gained immediate fame for this flight.

Meanwhile, Hubert Latham was idling when he found that Blériot was not making a test flight, and tried to pursue him to Dover. That attempt failed, and four days later he crashed into the Channel while trying to copy Blériot's flight.

Between 1909 and the outbreak of World War I in 1914, Blériot produced more than 800 aircraft, most of them being variations of the Type XI model. However, the quality of the aircraft was controversial, as inspections showed the numerous crashes with these aircraft. The British government put a temporary ban on them, for which Blériot himself investigated and solved the problems.

In 1913, a consortium led by Blériot bought the Société pour les Appareils Deperdussin airplane manufacturer and he became the president of the company in 1914. He renamed it as the Société Pour L'Aviation et ses Dérivés (SPAD). In World War I, his company produced the famous SPAD fighter aircraft flown by all the Allied countries, of which 5,600 were made for France.

He attempted to set up a British subsidiary through the Blériot Manufacturing Aircraft Company Ltd. 1916. Its listing was hijacked by a dishonest syndicate headed by Harry Lawson, leaving the company unable to meet its obligations, and it was soon shut down. In 1917, Bleriot tried again and built a factory in Addlestone, Great Britain. After the war, Blériot formed his own company, Blériot-Aéronautique, for the development of commercial aircraft.

In the United States, there was a legal patent battle for the invention of the aileron between the Wrights and Blériot: Blériot's airplanes were selling very well, but the Wright brothers did not receive any royalties from his profit even though the technology employed for controlling the planes, namely the aileron, was obviously from them. It was eventually decided that the Wrights devised the aileron first.

Blériot opened flying schools before World War I in at Brooklands, Surrey, and Hendon Aerodromes.

Blériot greatly contributed to the aviation community with his high skill and knowledge, and popularized aviation as sports activities. He remained active in the airplane business until his death in Paris.

In honor of his life, the Fédération Aéronautique Internationale established the "Louis Blériot medal" in 1936. The medal may be awarded up to three times every year to record setters in speed, altitude and distance categories in light aircraft, and is still being awarded to record-setting aviators.

In 2006, Rivendell Bicycle Works introduced a bicycle model named the "Bleriot 650B" as a tribute to Louis Blériot. It features his portrait displayed on its seat tube. (info from Wikipedia)
Posted by Michael N. Marcus at 6:48 AM