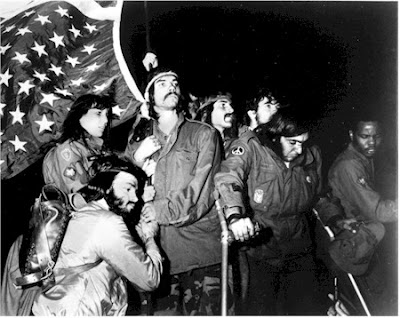 In the late 1960s, protests broke out all over the world in opposition to US involvement in Vietnam. In 1967, six Vietnam veterans marched together in a peace demonstration. When Vietnam Veterans Against the War formed, it was the first time that veterans joined activists and students to address the Vietnam War. VVAW was organized to voice the growing opposition among returning servicemen and women to the still-raging war in Indochina, and grew rapidly to a membership of over 30,000 in the US as well as GIs stationed in Vietnam. Through ongoing actions and grassroots organization, VVAW exposed the ugly truth about US involvement in Southeast Asia and their first-hand experiences helped many other Americans to see the unjust nature of that war.

In 1971, Vietnam Veterans Against the War held a Winter Soldier conference, detailing the atrocities of the war by those who experienced it. The film Winter Soldier is a documentation of the event.

According to Bob Fiore, one of the 18 filmmakers who worked on the project,"Around 1991, I showed the film in a class my daughter was taking at Sarah Lawrence on the history of Vietnam. The students saw it as an historical document because there was no war going on. The film didn’t have any immediate relevance. Instead, they mostly asked why the Vietnam War was such a passionate subject with their parents. With the Iraq war here has been an enthusiastic and renewed interest in the film. Milestone Films put the film in theaters, on television, and have made it available on DVD. It’s available on Netflix. Before, it was an effort to keep the film alive, but now it is thriving."

VVAW says, "VVAW quickly took up the struggle for the rights and needs of veterans. In 1970, we started the first rap groups to deal with traumatic after-effects of war, setting the example for readjustment counselling at Vet Centers now. We exposed the shameful neglect of many disabled vets in VA Hospitals and helped draft legislation to improve educational benefits and create job programs. VVAW fought for amnesty for war resisters, including vets with bad discharges. We helped make known the negative health effects of exposure to chemical defoliants and the VA's attempts to cover-up these conditions as well as their continued refusal to provide treatment and compensation for many Agent Orange Victims.

Today our government is still financing and arming undemocratic and repressive regimes around the world. Recently, American troops have been sent into combat in the Middle East and Central America, for many of the same misguided reasons that were used to send us to Southeast Asia. Meanwhile, many veterans are still denied justice -- facing unemployment, discrimination, homelessness, post-traumatic stress disorder and other health problems, while already inadequate services are being cut back or eliminated.

We believe that service to our country and communities did not end when we were discharged. We remain committed to the struggle for peace and for social and economic justice for all people. We will continue to oppose senseless military adventures and to teach the real lessons of the Vietnam War. We will do all we can to prevent another generation from being put through a similar tragedy and we will continue to demand dignity and respect for veterans of all eras. This is real patriotism and we remain true to our mission." (info and photo from P.S.1 Contemporary Art Center and from VVAW.org)
Posted by Michael N. Marcus at 5:12 AM

This is the first time I've ever blogged. I want Michael to know how much I appreciate him, what he did back then, and writing this now. I think Michael and any others reading his article would be interested in my book, Patriotism, Peace and Vietnam: A Memoir. I've managed to get it into a couple colleges where it continues to be used since the students react so positively to it. I invite anyone to go to my website at www.peghanna.com. By the way, I'm an associate member of VVAW and Veterans for Peace.