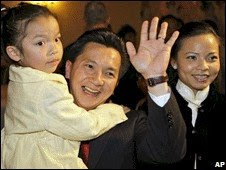 The victory for a 41-year-old child of Vietnam War refugees was greeted with amazement and drew parallels to last year's election of Gov. Bobby Jindal, an Indian-American Republican.

It also confirms a general shift to the GOP in Louisiana, where the Democratic Party dominated for generations and no Republican had represented New Orleans since 1890.

Cao was buoyed by low turnout, a lackluster campaign by Jefferson, strong third-party candidates and the election being postponed a month by Hurricane Gustav. State and national Republicans seized on the race with a well-funded and effective campaign, bombarding targeted neighborhoods with automated telephone calls, signs and flyers.

Jefferson faced some of the most direct attacks since 2005, when a wide-reaching corruption probe against him was made public and FBI agents found $90,000 in alleged bribe payments in his freezer. He currently faces trial on charges of money laundering, racketeering and bribery, but no date has been set.

In conceding the race, Jefferson blamed fatigue among his supporters. "I think people just ran out of gas a bit," Jefferson said Saturday night. "People today flat didn't come out in large numbers."

In many ways, Cao won on a protest vote by white voters from both major parties indignant about Jefferson's staying power. Analysts said white voters turned out by a ratio of 2-to-1 over blacks.

Nonetheless, Cao's win was viewed as improbable and important for the Asian communities of eastern New Orleans and the West Bank, a series of suburbs across the Mississippi River from the city.

The community - made up of war refugees from Southeast Asia who came here in the 1970s - has gained in strength since Katrina and it is widely viewed as a rebuilding model.

"They jumped onto it with nobody's help," said Pete Gerica, a commercial fisherman and industry advocate who lives near the Asian community, known generally as Village d'Est or Versailles. "It's a self-contained city," Gerica said. "They have steelworkers, carpenters, everything they need right there. They have shoe makers, they got people who make clothes. They are a very tight-knit family and that's what makes good people, when you put family first."

Cao (pronounced "Gow") is largely unknown, but his compelling life story attracted many voters. He was born in Vietnam and had to flee the country after Saigon fell in 1975 at age 8. His father, a South Vietnamese army officer, was imprisoned by Communist forces and later released.

He earned a degree in philosophy from Fordham University and moved to Louisiana in 1992 as a seminarian. He earned his law degree from Loyola University in New Orleans.

He has personally experienced the destructive powers of hurricanes in the low-lying region. His home in an upscale suburb outside New Orleans' levee system was flooded by Katrina and Gustav.

The congressman-elect describes himself as a political moderate with only one firm policy belief: He is against abortion. As a lawyer, he has worked for Boat People S.O.S., a national Vietnamese-American advocacy group for refugees. He became known in New Orleans in 2006 as a leader in an emotional campaign to close a new landfill for Katrina debris. In 2007, Cao ran for a state House seat as an independent and lost.

He said his win Saturday proved Louisiana is open-minded. "The people of Louisiana are very special, very progressive," he said, "and I think we will serve as a beacon for the rest of the country." (info from The Associated Press, photo from BBC)
Posted by Michael N. Marcus at 5:43 AM