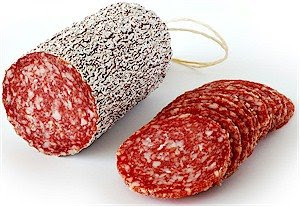 The origins of the pig go back to the beginning of time, and the pig is certainly one of the animals most appreciated by human beings. In Italy, the use of pork meat, especially salted and processed, goes back a long time.

Initially, animals were reared exclusively to meet the requirements of the family or of the village. It was only in Etruscan times that the first forms of non-nomadic breeding had started to develop, along with a higher degree of specialization which was also aimed at trading. A significant testimony arrives from the archeological site of Forcello (5th century BCE), in the province of Mantua, where 50,000 pieces of animal bones, of which 60% from pigs, were found.

In Roman times, the interest progressively focused on pork legs; the breeding of pigs saw an increasingly precise improvement of the raw material and of processing methods. Ham becomes the most precious product obtained from pork and the cause of innumerable social and celebrative events.

With the successive Barbarian invasions, pigs become one of the most important resources for the villages, and for the countryside, in the form of pork products and the preserved meats - hams, shoulders and pancettas - even become monetary currency. In the Middle Ages, pig grazing was so important that woods are measured according to their ability to nourish pigs, rather than to their size.

With the passing of centuries, pig breeding and the consumption of pork-related products progressively gain importance, going from the triumphs of the Renaissance period, when the art of gastronomy develops and pork appears on the most sumptuous banquet tables, up to the nineteenth century, when the first food workshops and sausage and salami shops open.

Between the 12th and the 17th centuries, Italy saw a strong development of the jobs linked to the processing of pork. This was the period when the figure of the norcino (pork butcher from Norcia) appeared and thanks to his skills, he created new charcuterie products.

These professionals started organizing themselves into guilds or confraternities and they started taking on important roles within the society. Bologna saw the establishment of the Corporazione dei Salaroli (the Guild of Salters), Florence, at the Medici epoch, saw the rise of the Confraternita dei facchini di San Giovanni (the Confraternity of Saint John’s Servants) that was initially part of an association of pork butchers and then dedicated itself also to patronage and art.

In 1615, Pope Paul V, recognised the Confraternity of Pork Butchers dedicated to the Saints Benedetto and Scolastica and, later, his successor Gregorius XV elevated it to Archconfraternity, which, in 1677, was joined also by the University of Norcia and Cascia Pork Butchers and Empirical Pork Physicians (types of sorcerers). Graduated, blessed and patented, norcinos increased their fame also outside the Papal State.

Their activity, however, was seasonal because pigs were slaughtered once a year and there were no techniques for fresh meat preservation. They used to leave their cities (Norcia, Cascia, Florence and Rome) at the beginning of October and return home at the end of March, when they would resume their normal work selling hay or gardening tools. The fame of the norcino figure remained unchanged until the aftermath of the Second World War.

Today, the heritage of norcinos has been handed down to the artisans and to the food industry world that is always ready to create innovative products, sometimes rediscovering its ancient recipes. Variations of salami are made all over the world, and some, such as Kosher salami, has no pork at all. (info from Istituto Valorizzazione Salumi Italiani transalted and adapted by aaanetserv.com)
Posted by Michael N. Marcus at 6:19 AM