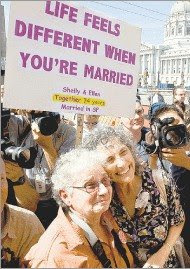 Thursday, the California Supreme Court opened the door to same-sex marriages in the nation's largest state, reigniting a hot social issue amid a presidential campaign dominated by economic issues and the war in Iraq.

The ruling makes California the second state, after Massachusetts, to give gay and lesbian couples the right to marry. But lawyers said the state's national influence and size -- representing 12% of the country's population and one-fifth of the electoral vote need to win the White House -- make the decision the most important legal victory to date for proponents of same-sex marriage. The decision, coming six months before the presidential election, also could galvanize voters on a topic that in this campaign cycle has largely been on the sidelines.

A handful of states, including California, Vermont and New Jersey, allow same-sex couples to enter civil unions or domestic partnerships that afford many of the rights of marriage. But the California court, which was considering whether state law prohibiting gay marriage violates California's constitution, voted 4-3 that such protections didn't go far enough.

"Retaining the designation of marriage exclusively for opposite-sex couples and providing only a separate and distinct designation for same-sex couples may well have the effect of perpetuating a more general premise -- now emphatically rejected by this state -- that gay individuals and same-sex couples are in some respects 'second-class citizens,'" wrote the court.

Same-sex marriage is recognized only in Massachusetts, but a state Supreme Court ruling Thursday puts California on a path to become the second state to do so. Four states --Vermont, New Jersey, Connecticut and New Hampshire -- have civil unions. California has been one of five states with domestic partnership or reciprocal benefits laws that provide some marriage-like rights to same-sex couples. The others are Hawaii, Maine, Oregon and Washington, as well as the District of Columbia.

A proposed constitutional amendment to ban same-sex marriage will be on Florida's ballot in November. Backers of a similar measure in California say they have gathered enough signatures to qualify it for the ballot; the signatures are under review. The Arizona Legislature is considering putting such an amendment on the ballot there.

Since the state has no residency requirement for marriage, out-of-state couples may also get married there, said Shannon Minter, the legal director for the National Center for Lesbian Rights. That policy would differ from the one in Massachusetts.

It's not clear whether California same-sex marriages will be honored elsewhere. States generally can either honor or reject gay marriages granted in other states. Legal experts say courts haven't yet ruled on whether a same-sex marriage from Massachusetts will have binding effect in another state.

Also unclear is what will happen to California same-sex marriages between now and the passage of any ballot initiative that would impose a constitutional ban. Jon Davidson, legal director of gay-rights group Lambda Legal, said he knows of no state that has retroactively nullified a marriage validly entered.

"We will see a lot of June weddings" in California, he said. "We believe that couples who marry before the ballot initiative, if it were to pass, will be married, but I'm sure our opponents will argue."

Stuart Gaffney, one of the plaintiffs in the case, said he felt overjoyed that he can marry his longtime partner, John Lewis. "We have waited over 21 years for this day," Gaffney said. "Today is the happiest, most romantic day of our lives."

The decision comes amid signs of a shift in public attitudes toward gay marriage. A poll from the Pew Forum on Religion & Public Life last year showed that 55% of Americans opposed allowing gays to marry, down from 63% in 2004.

Even without those other issues, he said, "every year the acceptance of gays and support for gay rights increases. And that is most true among young people, including conservatives." The ruling, he said, "is at best a mixed blessing" for Republicans.

Indeed, the decision may put Republican candidate Sen. John McCain in a tough spot with social conservatives as well as independent voters and young people, who aren't as motivated by those issues and may be turned off by his positions on them.

Sen. McCain favors state amendments against same-sex marriage but opposes a federal ban, saying it would trample federalist principles against meddling in state-level issues. "John McCain supports the right of the people of California to recognize marriage as a unique institution sanctioning the union between a man and a woman, just as he did in his home state of Arizona," spokesman Tucker Bounds said Thursday. "John McCain doesn't believe judges should be making these decisions."

As for the issue of whether states can legalize gay marriage, an aide Thursday said Sen. McCain "supports the right of the voters to make that decision -- not the courts."

Sen. Barack Obama, a Democratic presidential contender, has said that while he personally believes marriage is between a man and a woman, he supports a federal civil-union law and has compared the effort to the civil-rights movement.

"I am a strong supporter not of a weak version of civil unions, but of a strong version, in which the rights that are conferred at the federal level to persons who are part of a same-sex union are compatible," Obama said last year, adding that his parents wouldn't have been permitted to marry in some states due to miscegenation laws. Thursday his campaign said he respects the decision of the court and believes states should make their own decisions.

His rival for the party's nomination, Sen. Hillary Clinton, supports civil unions but believes states should decide the issue of marriage, her campaign said Thursday. A campaign spokesman said, "As president, Hillary Clinton will work to ensure that same-sex couples have access to these rights and responsibilities at the federal level."

Two states besides California -- Florida, a crucial swing state, and Arizona -- may put a gay-marriage ban before voters in the fall. New Jersey's legislature is considering an initiative extending marriage to gay couples. Cases are pending before the high courts of Connecticut and Iowa.

The court's ruling is expected to become final 30 days after it issued, and it must then head back to a San Francisco trial court for further orders, said Mr. Minter, of the National Center for Lesbian Rights. "But shortly, couples will be able to marry in California," he said. (info & photo from The Wall Street Journal)
Posted by Michael N. Marcus at 6:00 AM