1902: first US postage stamp with a woman 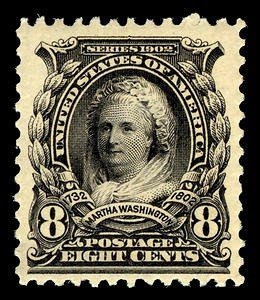 Issued in November 1902, the 8-cent Martha Washington was the first US stamp to feature a woman.

Mrs. Washington's stamp was introduced at a time when Americans began recognizing the importance of women's contributions to society. Although women had not yet earned the right to vote, the suffrage movement was gaining momentum. Supposedly, after much squabbling over which prominent woman should be the first to grace a US stamp, Mrs. Washington's name evoked the least controversy.

Although a groundbreaking moment for the country, the historic stamp lagged 65 years behind England's 1P Queen Victoria stamp of 1837, and came 55 years after the first US postage stamp, which featured Benjamin Franklin, was issued. (info from Yahoo)
Posted by Michael N. Marcus at 4:44 AM

I believe it was actually Queen Isaballa of Spain in 1893