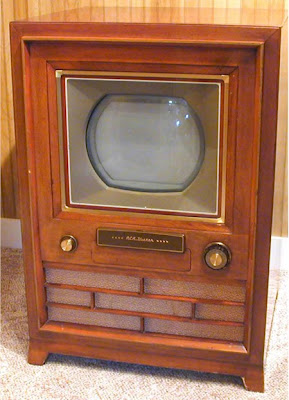 The RCA CT-100, introduced in March 1954, was the first mass-produced all-electronic color TV receiver. Its $1,000 price tag would be equivalent to about $6,000 today -- about the price of a high definition set five years ago. It provided a rounded side image just over 11 inches wide by 8 inches high. The picture tube in this set was expensive to make, and RCA lost a considerable amount of money on each set sold.

After heavy advertising failed to sell many sets, the price was dropped to $495 by August. Shortly after that, RCA perfected its 21-inch tube, and recalled most of the CT-100s, swapping them for the new 21-inch sets at no cost.

Because they were initially so expensive and there was little color programming available, it took more than a decade for color television to become common in American homes.(info from NPR and earlytelevision.org, photo from Early Television Museum)
Posted by Michael N. Marcus at 5:02 AM