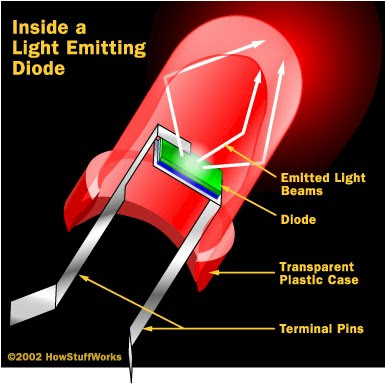 About 12 billion electric lights on the planet use "Edison" type bulbs; a third are in the US. Lighting up the world consumes about 2 trillion kilowatt-hours annually, or one-eighth of all electric power. This takes a lot of fuel: the equivalent of nearly a billion tons of coal annually. In the US, half of that is in fact coal. Or, in oil-equivalent terms, US lighting uses the equivalent of 50% of the energy used by all cars on American roads.

People crave illumination, have for centuries, and the real economic cost of illumination has utterly collapsed. It is 1,000 times cheaper to light up a room today than at the dawn of the 20th century, and 10,000 times cheaper than in 1850. Consequently, appetites have soared for the central product of illumination technology, lumens. Humans consume 40,000 trillion lumen-hours per year. Focus on the lumen, not the bulb, to understand the future.

Until now, there have been only three illumination technologies: fire, from, first, torches, tallow and wax candles and, later, whale and kerosene oil lamps; electric incandescence, famously perfected in 1879; and electric-induced fluorescence, introduced in 1938 by General Electric . In 1962, Nick Holonyak, a GE engineer, invented the LED, marking the next pivot in illumination's millennia-long march toward ever more ubiquitous, cheaper lumens. Holonyak may eventually become more famous than Edison.

LEDs are fabricated from various concoctions of "compound" semiconductors, mainly gallium and indium. All older forms of illumination use brute force to heat something till it glows. The central difference with an LED is that photons are emitted by designing precise semiconductor junctions, tuned just so to emit photons.

Commercial LEDs were quickly introduced by 1968. Early ones dribbled out pathetically small flows of lumens and were ridiculously inefficient, converting fewer watts to lumens than even the notoriously inefficient incandescent bulb. Still, they were enough to start the revolution. The tiny, solid, robust and very long-lived LED was ideal for instrument and indicator lights and digital watches).

With time, engineers rapidly refined the machinery of photonic semiconductors. Today's LEDs are 1,000 times more efficient than they were in 1968, and more colors are available -- even white, which had been though to be impossible.

Comparable efficiency gains can be found only in the semiconductor world, such as the oft-cited Moore's Law for microprocessors -- which states that information processors get twice as fast (or twice as cheap) every 18 months. LEDs have followed a lesser-known photonic equivalent, called Haitz's Law, named after the LED researcher Roland Haitz. The law says LED brightness doubles every 18 to 24 months.

By the eve of the 20th century, the first high-brightness LEDs had emerged. Measured by the key economic and enviro-metric lumens produced per electric watt, LEDs are now about to blow past all antediluvian illuminators. LEDs have already achieved 100 lumens per watt, with 200 visible. Incandescent bulbs yield some 15 lumens a watt, CFLs about 80. LED pioneer Cree passed a related milestone last September, introducing a single, tiny LED that produced 1,000 lumens, the output of a standard bulb but at almost five times the efficiency.

Applications for LEDs have followed their rising power and declining cost, from instrument displays in the early days, to traffic signals and automobile brake lights and interiors, to back-lighting mobile phones and LCD screens, decorations and chandeliers in Buckingham Palace.

With the lumen power in hand and costs declining, there is one last hurdle for LEDs to overcome in order to conquer general illumination. The reason most people have resisted and will resist using CFLs, and that also currently impedes LED adoption (particularly for indoor lighting) is the quality of the light. If you hadn't noticed, it's lousy. CFLs must achieve the light quality of incandescence to enjoy wider adoption. (info from Forbes, diagram from How Stuff Works))
Posted by Michael N. Marcus at 5:31 AM

Thanks to the blog owner. What a blog! nice idea.