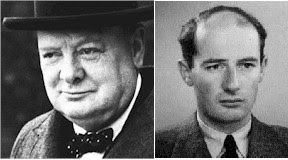 In World War II, Churchill distinguished himself through speeches, and found ways to motivate the people despite horrible circumstances. After the end of the Battle of Britain, Churchill thanked the Royal Air Force by uttering the immortal words, “Never have so many owed so much to so few.” Sir Winston was revered by his people, and managed to protect Britain and lead the nation on to victory.

After the war, Churchill was awarded the Order of Merit and was also elected to the Leader of the Opposition until 1951, during which time he published several books. In 1946, both Victory and Secret Session Speeches. He also wrote The Sinews of Peace, Painting as a Pastime, and began work on a six volume book on World War II. The books would be published with one a year, except in 1953, until 1954. During this time, Churchill was elected to a four-year term on October 26, 1951 and was made a Knight of the Garter in 1953. Later that year, Churchill was awarded the Nobel Prize for Literature after writing Stemming the Tide. Churchill resigned as the Prime Minister on April 5, 1955, but remained seated in the House of Commons for a while longer.

As soon as he finished the The Second World War Series, Churchill began work on a four volume series on A History of English-Speaking Peoples. The year after completing the book, Churchill was elected to his last term with the House of Commons, and was made an honorary citizen of the United States.

The 90 year-old Churchill died in London on January 24, 1965, and was buried near his birthplace of Blenheim Palace. With him died one of Britain’s most popular politicians, as well as one of the most talented writers. Sir Winston had written nearly 30 books, plus the separate volumes, and helped to guide his nation through the two major world wars of the 20th century. Sir Winston Churchill was also the first British citizen to become an honorary American Citizen.

Raoul Wallenberg was born in 1912 into a prominent Swedish family.

After finishing his studies in architecture at the University of Michigan and upon returning to Sweden, his grandfather sent him to Cape Town, South Africa, where Wallenberg practiced at a Swedish firm, selling building materials. After six months, his grandfather arranged a new job for him at a Dutch bank office in Haifa, then Palestine.

In 1944, Wallenberg accepted the offer of the "United States War Refugee Board" (WRB), an organization with the purpose of saving Jews from Nazi persecution, to observe the plight of Hungarian Jews in Budapest. He traveled as an envoy of the Swedish Foreign Ministry to Hungary.

Ivar Danielsson was head of the Swedish legation. His closest aide was secretary Per Anger. The Swedish legation in Budapest succeeded in negotiating with the Germans that the bearers of so-called "Schutzpässe" (protective passes, see picture at left) would be treated as Swedish citizens and exempt from wearing the yellow Star of David on their chest. It was Per Anger, who initiated the first of these Swedish protective passes.

In 1966, Yad Vashem in Jerusalem honored Raoul Wallenberg as "righteous among nations." The same honor went to Per Anger in 1982 for his heroic actions to save Jews during the war.

Wallenberg headed the department responsible for helping Jews. In the following months, he courageously succeeded in saving 100,000 Jews from being deported and killed. Within six months, he managed to issue thousands of Swedish "Schutzpässe." In addition, he helped hide Jews in 30 safe houses in the Pest part of the city, where Jews could seek refuge, and he provided food and health care.

By power of his diplomatic orders, he was even able to pull a number of Jews off the deportation trains that were headed for the concentration camps in Poland. He climbed the train wagons, stood on the tracks, ran along the wagon roofs, and stuck bunches of protective passes down to the people inside.

In 1945, after Hungary's liberation by Soviet troops, Wallenberg and members of the Swedish consulate in Budapest were arrested. All were later released—except Wallenberg. He was accused of being an "American spy."

Whether Raoul Wallenberg is alive or dead is uncertain. The Russians claim that he died in their captivity on July 17, 1947 of heart failure. A number of testimonies, as late as the 1980s, indicate, however, that he was seen alive.

On October 5, 1981, Wallenberg became an honorary American citizen. At the time, only Churchill had been made an honorary American citizen. The legislation, initiated by Congressman and Holocaust survivor Tom Lantos who owed his life to Wallenberg's deeds — sped through Congress, and President Reagan signed it into law in the Rose Garden that fall.

"Our hope was that we could save [Wallenberg] by using a tactic similar to the one Wallenberg himself had so creatively applied during the war to save us and so many others," explained Lantos. "We would create an American citizenship document to give the United States an opportunity and reason to work for his protection. Some of us in Congress continued to press the Soviets through the years, using the vehicle of Wallenberg's honorary citizenship. Unfortunately, our progress in solving this mystery has been minimal."

On October 8, 1986, the street in Washington, D.C., where the United States Holocaust Memorial Museum was about to open to the public was renamed Wallenberg Place. And a bust of Raoul Wallenberg stands in the U.S. capitol.

"Many honors have been given, and will continue to be given, to preserve the memory of Wallenberg's achievements," says Lantos. "[In November], he will be made an honorary citizen of Budapest. Such honors are helpful in educating the world about Wallenberg's selfless and courageous work....The international community, and most especially the American government, must redouble their efforts to establish the facts of what happened to him. Additional pressure must be brought to bear against Russia to open all archives related to his case, even if it means unleashing embarrassing secrets of the Soviet era—or more recent secrets, and not just Russian ones."

(info from Angelfire & tekla-szymanski.com)
Posted by Michael N. Marcus at 6:25 AM

Ive read this topic for some blogs. But I think this is more informative.

You can read my original article on Raoul Wallenberg, where parts of this post was taken from, here: http://www.tekla-szymanski.com/rwic.html

I have also written a study aid to help prepare for the topic: http://www.tekla-szymanski.com/rwicstudy.htm