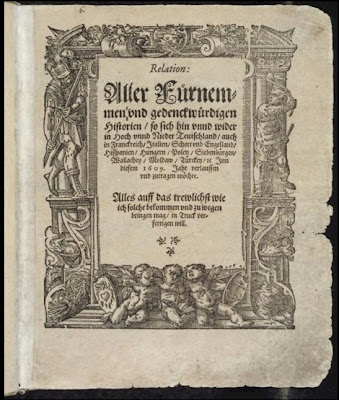 According to the World Association of Newspapers, Johann Carolus (1575 - 1634) was the publisher of the first newspaper, called Relation aller Fürnemmen und gedenckwürdigen Historien (Collection of all distinguished and commemorable news). The Relation was first published in Strassburg, Germany, in 1605.

However, there are other possible first newspapers, depending on how the term is defined. Pre-history "newspapers" were one-to-one in nature. The earliest variation on a newspaper was a hand-scribed daily sheet published in 59 BC in Rome called Acta Diurna (Daily Events), which Julius Caesar ordered posted throughout the city. The earliest known printed newspaper was in Beijing in 748.

Zeitung (newspaper) is a news report published in Germany in 1502, while Trewe Encountre becomes the earliest known English-language news sheet in 1513. Germany's Avisa Relation oder Zeitung, in 1605, was the first regularly published newspaper in Europe. Forty-four years after the first newspaper in England, the Oxford Gazette is published, utilizing double columns for the first time; the Oxford/London Gazette is considered the first true newspaper. The first North American newspaper, Publick Occurrences Both Foreign and Domestick, was published in 1690 in Boston.