1977: US Supreme Court changes the phone business, and my life 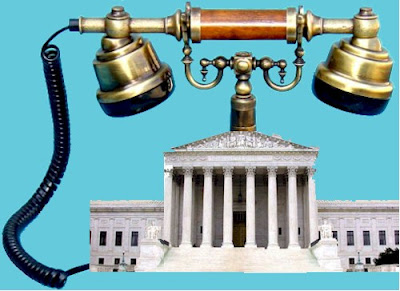 Today, the telephone is just another consumer electronics product. It's not much different from a television or a PC or stereo system. You can choose from hundreds of models sold by thousands of dealers, buy it, open the box, plug it in, and use it.

It wasn't always that way.

For about a hundred years, people rented phones from their local phone companies.

Most Americans were served by AT&T-owned phone companies, and rented phones that were made in AT&T's Western Electric factories.

Many others were served by GT&E-owned phone companies, and rented phones made in GT&E's Automatic Electric factories.

Customers of smaller "independent" phone companies rented phones made by IT&T, Stromberg-Carlson, Northern Electric, and sometimes by GT&E or AT&T or tiny companies that are long gone.

Led by AT&T, the nation's phone companies had very restictive rules ("tarrifs") that dictated what customers could do and could not do. These tarrifs were approved by federal and state governments, and functioned like federal and state laws. Some tariffs made sense. Some didn't. Obfuscation was common, and tariffs were generally approved with little debate by the governing bodies.

For most people, the most annoying, restrictive, and costly tarrifs were those that prohibited "foreign attachments" to phone company property.

The phone companies tried to scare their customers with bogus warnings about dangers to the national communications network. They implied that if someone plugged an IT&T phone into an AT&T phone jack (or an AT&T phone into a GT&E phone jack), satellites would fall from the sky, radar would fail to sense incoming Russian bombers, and lineman would get electrocuted on the telephone poles. Theoretically, if you put a plastic cover on a phone book -- which was phone company property -- you could get arrested by a state trooper.

In reality, most phone equipment was quite safe, reliable, and compatible. Out of public view, AT&T phone companies bought central office switches from Northern Telecom, and GT&E supplied phones made by IT&T, and IT&T sold phone systems made by Fujitsu... and the phones kept ringing just fine. Lots of people used "illegal" phones without causing harm -- except to the phone companies' profits.

Gradually, the Feds forced the phone companies to be less restrictive.

Hush-a-Phone v. FCC was a ground-breaking ruling in telecommunications law, decided by the DC Circuit Court of Appeals in 1956. Hush-a-Phone was a small, cup-like device which mounted over the transmitting end of a telephone handset, reducing the risk of conversations being overheard, and decreasing the transmission of noise.

AT&T, citing the Communications Act of 1934, claimed the right to forbid attachment to the telephone of any device not furnished by the telephone company. Initially, the FCC found that the device was a "foreign attachment" subject to AT&T control and that unrestricted use of the device could, in the commission's opinion, result in a general deterioration of the quality of telephone service.

The court's decision, which exonerated Hush-a-Phone Co. and prohibited further interference by AT&T toward Hush-a-Phone users, stated that AT&T's prohibition of the device was not "just, fair, and reasonable", as required under the Communications Act of 1934, as the device "does not physically impair any of the facilities of the telephone companies", nor did it "affect more than the conversation of the user".

In 1968, the FCC allowed the Carterfone to be connected directly to the AT&T network. The Carterphone provided a connection between two-way radio and telephone. When someone on the radio neededed to speak to someone on the "landline" phone, the station operator at the Carterfone base would dial the number. When callers on the radio and on the telephone were both in contact with the base station operator, the handset of the operator's telephone was placed on a cradle in the Carterfone to enable a conversation.

Later on, the Feds forced the telcos to allow businesses to connect actual phone systems -- not just gadgets --, but they had to be connected through a complex "registered protective coupler" that theoretically would keep a privately-owned phone system from damaging the public phone network, and causing the satellites to fall and allow Russian bombers to approach un-detected.

The couplers had to be rented from the local phone companies, at a cost of about $10 per line per month. This was not a big deal for a company with a large PBX system, with perhaps a hundred phones sharing a dozen phone lines, but it didn't make sense for small businesses and residential customers.

It was no good to buy three phones to save $9 in monthly phone rental, and then pay $10 per month to rent the coupler.

The coupler rental program was supported by the FCC, but on October 17, 1977, the US Supreme Court overruled the FCC and slammed the phone companies and changed my life.

Operating under the premise that any phone device that is privately beneficial without being publicly harmful, the Supremes dictated that people could connect phones directly to the network, without renting that stupid coupler, as long as the phones met certain technical standards (basically, the same AT&T-dictated standards that phones already met).

A new bureaucracy appeared at the Bell companies -- the Centralized Operations Group ("COG") -- that handled installation requests from phone system sellers. These businesses were known as "interconnect companies," because they supplied products that interconnected with the public telephone network.

For several years, interconnect companies had to submit a notarized "notice of intent to interconnect," that detailed the equipment to be installed and the services needed from the telcos. By the mid-1980s, the COGs and notarized forms largely disappeared, and people plugged in whatever they wanted to. Some stupid rules lingered. At one time, New York Telephone (later NYNEX, Bell Atlantic, and Verizon) allowed connection of privately-owned one-line phones, or 29-line phones, but not 2-line phones.

At the time of the Supreme Court ruling, your humble editor was an advertising copywriter, with a long history of installing illegal phones. I hereby confess to my many crimes; but I'm proud to declare that my work never caused radar failure at the DEW Line ("Distant Early Warning" system). No Russian bombers reached the US because of a phone I installed, or because my mother put a vinyl cover on the phone book in our kitchen.

I sensed that the new legal environment provided a big business opportunity, and considered making the phone business my daytime job, and switching my writing to the dark hours. Starting a new business is risky, but my father told me that if I didn't try it, I could regret it for the rest of my life.

After 30 years, I'm still in the phone business during the day, and writing when it's dark out.
Posted by Michael N. Marcus at 5:16 AM