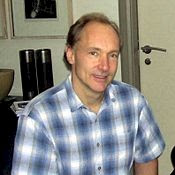 Sir Timothy John Berners-Lee is one of the inventers of the World Wide Web, and created the first Website.

Tim Berners-Lee was born in London in 1955, the son of mathematicians who helped build the Manchester Mark I, one of the earliest computers. They taught Berners-Lee to use mathematics everywhere, even at the dinner table.

He is an alumnus Oxford where he played tiddlywinks against rival Cambridge. While at Oxford, Berners-Lee built a computer using an old television. During his time at Oxford, he was caught hacking and was banned from using the university computer. He graduated in 1976 with a degree in physics.

In 1980, while at CERN (the world's largest particle physics laboratory based in Switzerland) Berners-Lee proposed a project based on the concept of hypertext, to facilitate sharing and updating information among researchers. He built a prototype system named ENQUIRE.

In 1989, CERN was the largest Internet node in Europe, and Berners-Lee saw an opportunity to join hypertext with the Internet: "I just had to take the hypertext idea and connect it to the TCP and DNS ideas and — ta-da! — the World Wide Web."

He wrote his initial proposal in March of 1989, and in 1990, with the help of Robert Cailliau, produced a revision which was accepted by his manager, Mike Sendall. He used similar ideas to those underlying the Enquire system to create the World Wide Web, for which he designed and built the first web browser and editor (called WorldWideWeb and developed on NEXTSTEP) and the first Web server called httpd (short for HyperText Transfer Protocol daemon).

The first Website built was at CERN, put online on August 6, 1991. It provided an explanation about what the World Wide Web was, how one could own a browser and how to set up a Web server. It was also the world's first Web directory, since Berners-Lee maintained a list of other Websites apart from his own.

In 1994, Berners-Lee founded the World Wide Web Consortium (W3C) at MIT. It included several companies that were willing to create standards and recommendations to improve the quality of the Web. The World Wide Web Consortium decided that their standards must be based on royalty-free technology, so they can be easily adopted by anyone.
Posted by Michael N. Marcus at 4:53 AM