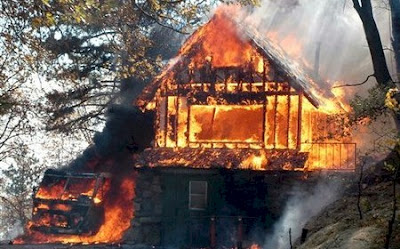 With the "Great Fire of 2007" now in its 27th year, 84-year-old Andrew "The Last Californian" Goldberg has packed up his clothing in San Bernardino, and is headed to Tucson to live with his sister.

Former Governor Arnold Schwarzenegger, interviewed in the Las Vegas nursing home where he moved in 2025, said "it's very sad to see our once beautiful state abandoned; but the fires, land slides and earthquakes make it unfit for human habitation. Back in 1851, a newspaper writer in Indiana urged 'Go West, young man,' but the Pacific coast was just too far west. People should have stopped at Salt Lake City or Phoenix or Boise."

Evacuation of Southern California was ordered in 2009 by President Barack Obama, and other parts of the state were gradually emptied in later years. A few hold-outs hid in cabins and tents in the Napa Valley, and in caves in Death Valley, but were eventually hunted down and forced to move by National Guard troops after the end of the Iraq War in 2031. Andrew Goldberg was a Federal employee who supervised the cataloging and packing of municipal archives, and his work just finished.

Fire-fighting efforts, and Social Security benefits, were terminated in 2012 when their daily cost equalled the cost of the Iraq War. Congress acknowledged that "we must fight the Shi'ites, but we can't fight Mother Nature," and stopped funding FEMA and Federal insurance programs.

Also in 2012, the government re-opened several detention camps that were used for Japanese-Americans during World War 2, to provide temporary housing for former Californians until they could arrange for permanent housing. Californians were granted a one-time payment of $250,000 per family for re-location in the US, or $1,000,000 for re-location in other countries.

Osama Bin Laden was found hiding in the charred remains of the Armani boutique on Rodeo Drive in Beverly Hills last year.

The US Coast Guard maintains rescue stations on Alcatraz Island in San Francisco Bay, and on Catalina Island near the former city of Long Beach, and there are several robotic light houses and weather stations along the coast.

California was settled by the Spanish, and became the nation's 31st state in 1850. At one time it held more people than any other state (over 36,000,000 people -- 12% of the US total) and had important economic and political influence in the country. It was the third largest state, with 163,707 square miles.

The state's physical and economic infrastructures were dismantled and re-located. Wine makers moved to Australia and Bosnia. Hollywood was re-constructed in Toronto, Canada. Silicon Valley was re-constituted up the coast near Redmond, Washington. Surfing moved south, to Baja California (part of Mexico). Orange growers moved to Florida and Israel. Disneyland and Knotts Berry Farm are now in Bangalore, India. The Golden Gate Bridge now spans the Jordan River. San Francisco's cable cars are in Nepal. Television production moved to Las Vegas. Several historic missions and forts from California's time as a Spanish colony were dismantled and reconstructed on the campus of Bob Jones University in South Carolina.

Colleges, universities, libraries and museums were dispersed nationwide and worldwide. Large percentages of San Francisco's Chinatown and Los Angeles's Iranian Jewish populations -- even people born in the US -- moved to China and Iran. Most Californians of Mexican ancestry moved to Arizona, New Mexico, Texas or Mexico. Small "California Town" neighborhoods have sprouted up around the US, as havens for refugees, and sources for West Coast foods and fashions.

In 2025, when the known population of the former "Golden State" dropped below 1,000, it lost its statehood, and was re-labeled "The Western Territory." For two years, the US had just 49 states, but got back to 50 when Puerto Rico was granted statehood in 2027, and reached 53 states with the admission of Cuba, Bermuda and Israel in 2029.

The number of states may change several times in the near future. Haiti, the Dominican Republic, Barbados, the Cayman Islands, Zimbabwe, Liberia, Macao, Monaco, Vatican City, Uzbekistan, Palestine, Sicily, and the Republic of Suriname are seeking American statehood. Maine has voted to leave the US and become part of Canada. Hawaii wants to become an independent kingdom, and North and South Dakota are expected to merge.

President Romney is pursuing a growth by annexation program, and said in last year's State of the Union Address, "Baskin-Robbins has made over 1,000 ice cream flavors, and I see no reason why the USA can't have 1,000 states. It's a little sad to lose Hawaii and Maine, but most of the people in Hawaii are Japanese tourists, and Maine has more moose than people anyway, so it's no big deal. To keep growing our GNP and assets, we need to consider lots of potential states, and different kinds of states. Why can't we buy Greenland, or grab the Moon and the Sun?"

China, Mexico, Dubai, Apple-Micro-Google-Sony-AT&T, and the Walt Disney Corp. have expressed interest in purchasing the former California, and Congress is expected to begin considering an auction in the near future, to help pay for the Iraq War debt. (photo from the Associated Press)
Posted by Michael N. Marcus at 4:54 AM

Absolutely brilliant. I hope I live long enough to see if it comes true.