1970: first strike by US postal workers 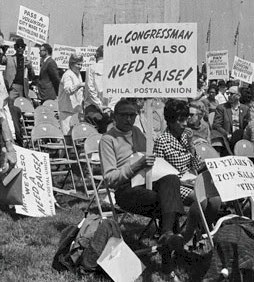 The American Postal Workers Union is the world's largest postal union, representing approximately 330,000 employees of the US Postal Service.

Postal unions date back to the 19th Century, but early unions had essentially no bargaining rights. They existed largely as lobbying organizations that otherwise had no say about their working conditions. Wage increases depended on the whim of Congress.

As a result, postal workers were chronically underpaid. In March 1970, full-time employees earned about $6,200 to start, and workers with 21 years of service averaged only $8,440 — barely enough to make ends meet at that time. In fact, many postal workers qualified for food stamps.

The sporadic raises they did receive never seemed to amount to much, particularly in high-cost urban areas. From 1967 to 1969, postal wages were not increased at all, although Congress did raise its own pay 41 percent during that time.

In 1968, the Kappel Commission, a special panel that had been studying postal reform during President Johnson's administration, concluded that postal workers deserved the same collective bargaining rights afforded to private-sector workers under the National Labor Relations Act. Congress failed to act on the commission's recommendation.

Workers grew increasingly frustrated with Congress's inaction, and on March 18, 1970, thousands of New York City postal workers walked off the job. Within days, they were joined by 200,000 others in 30 major cities. President Nixon appeared on national television and ordered the employees back to work, but his address only stiffened the resolve of the existing strikers and angered workers in 671 other locations in other cities into walking out as well. Workers in other government agencies also announced they would strike if Nixon pursued legal action against the postal employees.

Mail service ground to a halt and the plight of postal workers was brought to the public's attention. Nixon spoke to the nation again and ordered 24,000 Army, Army National Guard, Army Reserve, Air National Guard, Navy Reserve, Air Force Reserve, and Marine Corps Reserve forces to begin distributing the mail and break the strike. The military proved ineffective at the task, and the strike was soon settled, with Congress approving a 6 percent wage increase, retroactive to the previous December.

The strike served as an impetus for the enactment of the Postal Reorganization Act of 1970, which granted unions the right to negotiate with management over their wages, benefits and working conditions. In lieu of the right to strike, a binding arbitration process was established for resolving contract disputes. The law granted postal workers an additional 8 percent raise and enabled them to advance more quickly to higher-paying positions.

In the first contract, a starting postal worker's salary was raised to $8,488: slightly more than a 21-year veteran of the Post Office Department had been getting just three years earlier. (info from APWU and Wikipedia)
Posted by Michael N. Marcus at 5:58 AM