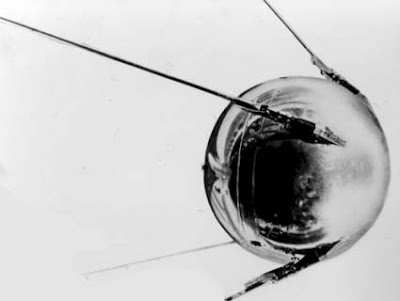 The Sputnik program was a series of unmanned space missions by the Soviet Union in the late 1950s to demonstrate the viability of artificial satellites. It included Sputnik 1, the first man-made object to orbit earth. The Russian name "Спутник" means literally "co-traveler" or "traveling companion" or "satellite".

Sputnik 1 was launched on October 4, 1957. The satellite was about 24 inches in diameter and weighed approximately 184 lbs. Each of its elliptical orbits around the Earth took about 96 minutes.

The surprise launch of Sputnik 1, coupled with the spectacular failure of the United States' first two Project Vanguard launch attempts, shocked the United States, which responded with a number of early satellite launches, including Explorer I, Project SCORE, and Courier 1B. The Sputnik crisis also led to the creation of the Advanced Research Projects Agency and NASA, and to major increases in US government spending on scientific research and education. (info from Wikipedia)
Posted by Michael N. Marcus at 6:39 AM