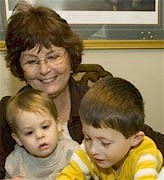 The nation's "first" baby boomer, a retired teacher from New Jersey, applied for Social Security retirement benefits Monday, signaling the start of an avalanche of applications from the post World War II generation.

Kathleen Casey-Kirschling applied for benefits over the Internet at an event hosted by Social Security Commissioner Michael Astrue.

Casey-Kirschling was born one second after midnight on Jan. 1, 1946, gaining her recognition as the first baby boomer — a generation of nearly 80 million born from 1946 to 1964.

Casey-Kirschling will be eligible for benefits after she turns 62 next year. She taught seventh graders for 14 years at a school near Camden, N.J., before retiring and volunteering for the Red Cross in Gulf Coast areas hit by Hurricane Katrina.

An estimated 10,000 people a day will become eligible for Social Security benefits over the next two decades, Astrue said. The Social Security trust fund, if left alone, is projected to go broke in 2041.

But Astrue said he is optimistic that Congress will address the issue, perhaps after the 2008 presidential election. President Bush had proposed changes in Social Security to create private accounts, but the proposal went nowhere in Congress.

Last week, Bush's budget director called the growth in Social Security, Medicare and Medicaid a "fiscal train wreck." The three entitlement programs make up nearly half of all federal spending, a share that is expected to grow.

A report issued last month by the Treasury Department said that some combination of benefit cuts and tax increases will need to be considered to permanently fix the Social Security shortfall. But White House officials stressed that Bush remains opposed to raising taxes.

"I think the baby boomers will want to get this fixed," she said. "They're going to want to take care of their children and their grandchildren." (info from The Associated Press)
Posted by Michael N. Marcus at 4:30 AM